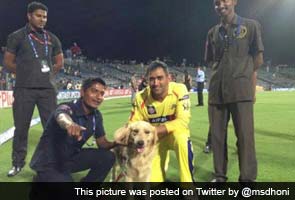 That MS Dhoni loves dogs is an old story.The latest is his tweets on them.

On Wednesday,he tweeted that in the stadium in Pune there were 24 dogs. “They have 24 dogs at the stadium,doberman,german and belgium shepherd,labs.Its nice to see them lined up together”.

If his tweets are to be believed Dhoni fell in love with one of them.” It was a Golden Retriever”,tweeted Dhoni.

If his previous tweets are to be believed,Indian Premier League matches do not figure.But he never make his comments on the social media on things he and his wife Sakshi love. Pet dogs are one of them.

On Wednesday, Dhoni (@msdhoni) tweeted: “Thts prince,golden retriever at the pune stadium” He even attached a photograph! And then to express his joy Dhoni tweeted: “Wd hve taken him to ranchi if I was going home from here.1 of the best golden retriever that I hve seen”

Even his wife Sakshi is fond of dogs too. Recently, she ‘adopted’ two female and one male street dog. The first lady of Indian cricket named the male dog “Sultan” and sought through Twitter “two names for the female dogs to compliment the name Sultan.”

Inside his home in Ranchi, Dhoni has domesticated two pet dogs, a Labrador named Zarah and an Alsation called Sam. When he was in the school, Dhoni had domesticated a parrot also. “After the parrot died, he had wept and wept”, recalls his mother Devki.