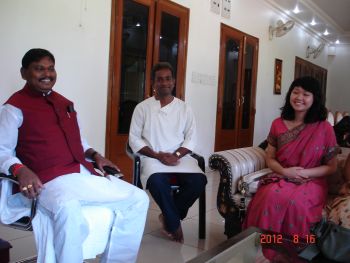 It was Arjun Munda his wife Meera’s accident day.At first,offering prayers in his official bunglow ,the couple knows why the dawn seemed different from any other.

Both of them were inside the bunglow for the whole day offering puja,meeting friends and thanking the God who had saved them.The day was May 9,2012.

That day Munda had escaped with a fracture in his right ankle,injury in his spinal cord and bruises on his left hand and legs. The five others on board, including his wife Meera, a BJP MLA and the two pilots, had miraculously survived.

The AgustaWestland 109 helicopter had taken off from Birsa Munda Airport at 11.16 am that day. Soon after take-off, pilots Manoj Kaushik and B K Singh realised that the speed of the chopper was “uncontrollable”.

They told Munda about it and said that they will have to fly back to Ranchi for emergency landing.Munda and Meera on board saw the chopper taking jerks.Instead of losing his sense,Munda backed the pilots and asked them to do whatever they deemed fit.The pilots took the chopper back to Ranchi.

On phone the pilots alerted the Air Traffic Control at Ranchi airport. Medical vans and firefighters were put on stand-by on the ground while CISF personnel were deployed on the runway.

The pilots kept the chopper flying in the sky till its fuel was almost exhausted. They then switched off the ignition, manoeuvred the helicopter down and finally let it crashed from a height of nearly 20 feet above the surface of the runway, at around 12.04 pm on that day.Rarely,any body had survived in such chopper accidents in the past.

“I saw the wings of the chopper taking a roll.I kept my eyes shut and remembered the God.Seconds later I realized the chopper had crashed landed as it made a noise”,recalls Meera who had received minor injuries on his back and legs.

Munda recalls:”Till the time the crash had not taken place,I cooperated with the pilots and told them to do whatever was considered best by them.Later,I found my self on the stretcher”,recalls Munda.

Any lesson learnt from this chopper accident.”I am a diferent man now.In pre accident period,when I used to do any body’s job I used to think that I am doing a favour to him/her.But now I think it is my responsibility ordained by the God”,says Munda adding:”Now I don’t leave anything undone for tomorrow.”