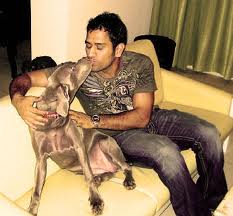 Even now whenever he is in town,he finds time to play with Zarah and Sam.