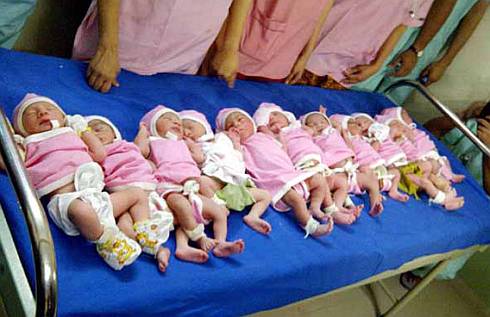 It was February 8,2012.Cyber world was abuzz with the news that a woman gave birth to 11 children — all at one go. The story was fuelled by this picture circulated on Indian blogs and with the said headline.

Blogs ran the picture stating that: hospital staff showing 11 babies born on unique date 11/11/11 in Surat. It was also rumored that 6 were twins. Doctors were really surprised, shocked and glad to have successful delivery.But later it turned out that the hospital in Surat had witnessed birth of 11 babies in one day.

Today a story by ANI said that “a woman in Poland is facing jail term after she gave birth to her premature son, who had severe alcohol poisoning at nearly 23 times the drink-drive limit, due to the high liquor levels in his mother’s bloodstream.”

The ANI story said “Surgeons had to perform an emergency c-section after the 24-year-old lady collapsed while buying more alcohol at an off-licence in Tomaszow.”

This story based on a report published in the Mirror added this:”According to hospital spokesman Wojciech Zawalski, the unborn baby was in severe risk of being poisoned to death.”

“He said that when the baby was born his heart was barely beating and he had 4.5g of alcohol in his bloodstream.The baby, who was born two weeks premature, is now recovering in an intensive care incubator and is being weened off alcohol.”