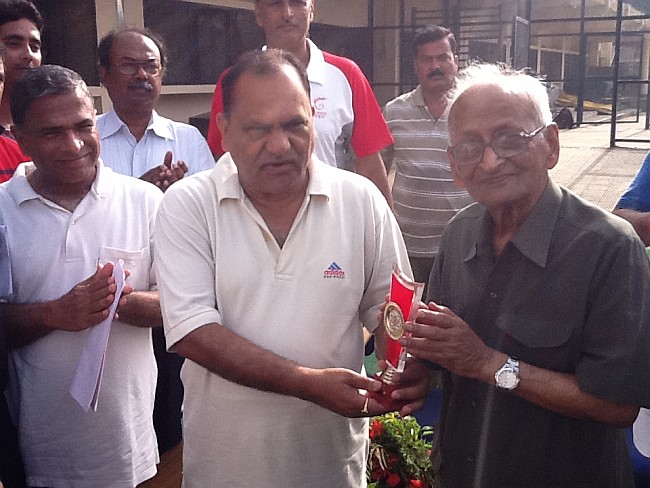 A group of morning walkers who had floated a body called –Citizens’ Council-today honoured a man who was the model doctor,a medical practitioner.

Prakash Chandra Asthana, who rose without his parents to do MBBS,MD(Anaesth) to trail blazing glory in Anaesthesiology,got a trophy and a shawl gifted by Jharkhand’s Speaker CP Singh on behalf of the Council.

The Council,a non registered body,aims to honour any senior citizen who was health conscious and who had during his life time contributed to the cause of the civil society.Dr Asthana was the first senior citizen to be honoured by the council in a meeting held inside the Birsa Munda Football Stadium in Ranchi on Saturday morning.

They spoke about Dr Asthana who has been an achiever of his own kind.

Born to parents who died during his infancy,Dr Asthana moved up the career ladder swiftly to lead the Rajendra Medical College Hospital’s Department of Anaesthesiology and retire as its Head.He was,in fact,brought up by his saintly maternal uncle(Mama).

And look at his portfolio:in Anaesthesiology,he is credited to have used an indigenous technique to administer anaesthia in an accurate volume at a time when there was no machine to regulate it.He was highly conscious citizen as well.

Ask him how he grew up without the love and care of his parents and pat comes his reply:”I grew up listening to the patriotic song:Vijayee Vishwa Tiranga Payara,Jhanda Ucha Rahe Hamara…”

Born on 29,1924(officially on October 31,1928) in Patna,Dr Asthana lost his both parents during his infancy.As a result,his schooling started only after his Mama Dr UP Sinha returned from UK in 1936.At the age of 12,he was admitted in Class IV in Patna Collegiate school in 1936.

As a student,under the influence of his maternal uncle,he imbibed Mahatama Gandhi’s thought and ideas.For the school magazine,he wrote an essay on -Vishwa Shanti Ke Prashna Par-in which he pleaded for adoption of truth and non violence as a solution to many existential problems.

Apart from pursuing science subjects,he used to attend Mahatama Gandhi’s prayers meetings held in central Patna,then known as “Bankipore Maidan” or “The Lawn”.After Mahatama Gandhi was assassinated on October 31,1948,Dr Asthana was the first person to suggest that the Maidan be named as “Gandhi Maidan.”This he did it by writing a letter to the Editor of The Searchlight which published it.

Dr Asthana also participated in the Quit India movement launched by Mahatama Gandhi.He vividly remembers August 11,1942 when a huge mass of people had gathered in front of Patna Secretariat to protest against the British Rule.”PCA(read Dr Asthana)and his friends took leading part in rganising the big procession.As the slogans Inquilab Zindabad,Angrezo Bharat Chodo rent the air,white skinned Patna District Magistrate Mr Archer,supported by the armed forces resorted to firing…Seven persons died on the spot and many were injured.Asthana who stood near by remained unhurt.He survived.But since he had taken part in the anti British agitation,his name was struck off the rolls of the school”,states a report.

Much later,while he served the RMCH,he was instrumental in installing the statue of the first President of India Dr Rajendra Prasad in front of its administrative building;helped create and develop Department of Anaesthology;and led to reorganization of MD(Anaesthology at RMCH.

In 1998,he confronted the problem of ‘coronary arteries blockades’ organising from 55 percent to 99 percent.In 2003,he lost his wife.Three of his children-one son and two daughters-who were professionals –were stationed out of Jharkhand.

When he was diagnosed and advised in the US that he should “immediately under go by pass surgery as a life saving measure”,Dr Asthana preferred to look the other way.He put himself on changed life style,faith in Nature’s self healing capacity,positive thinking and dedication to God.

Though he has no regret in life,he feels that though he had participated in the ‘Quit India’ movement,he was not accorded the status of a freedom fighter.When asked if he has any message for the youth of India today,he said:”Don’t take short cuts,do what you feel like,but do it with passion,commitment and honesty.”