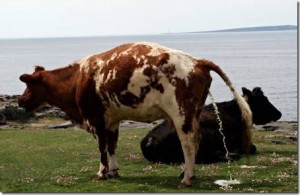 Leh was in the news with its Druk White Lotus School figuring in the Bollywood blockbuster – Three Idiots.At this school of Boileauganj in Shimla,an experiment showed that the cow’s urine can generate electricity.With the help of one-litre fresh cow urine, copper and zinc strips and batteries, approximately two volts power can be generated that can run a clock for 15 days.This was in 2011.

Today,a Gujarat man has made waves across the world with his claim that he had invented a clock that runs on cow urine.

AN AFP report carries the picture of Hirenbhai Bheda with a wall clock.Bheda has claimed that his wall clock runs on cow urine at a ‘gaushala’ run by a charitable trust at Luni village of Mundra Taluka, some 415 km from Ahmedabad.

Bheda displayed his invention on World Environment Day yesterday.He claims that this clock will run on two glass jars filled with two litres of fresh cow urine for close to a month.