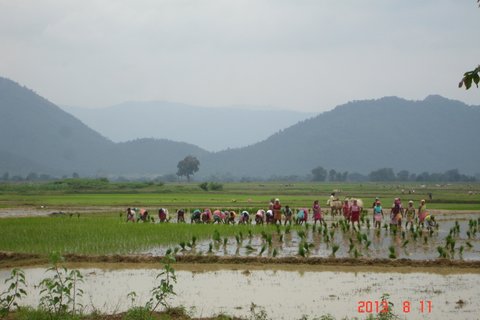 Everybody loves ‘drought’ in Jharkhand.

Or so it seems since all political parties cutting across party lines and belonging to both the ruling and the opposition camps have demanded that Jharkhand be declared drought hit.

“In the memorandum to the Governor, our party has sought a white paper on the drought situation prevailing in the state. The other demands include waiving of loans for farmers and immediately giving Rs 10,000 to the affected farmers,” said Jharkhand BJP spokesperson Pradeep Sinha.

In fact,while many parts of the country have received rain far in excess of the average this monsoon, Jharkhand was reeling under deficit rainfall,according to the official data.

Jharkhand has received 476 mm rainfall till the second week of August, against the average rainfall of 771 mm for the period. “This has affected paddy sowing in a number of districts”,said Manohar Singh,Deputy Secretary of the State Agriculture Department.

To check the ground reality,jharkhandstatenews.com sent a team to East Singhbhum.The team comprising a lens man and a reporter toured parts of Ranchi and East Singhbhum district on Sunday and Monday to find that transplantation of paddy plants was either going on or was already complete in the middle and the low plots of the land there.

The up lands in some areas near Jamshedpur where there was no water,remained untilled. “Even now if the rain god smiles on us,the plants will grow and yield enough paddy”,said Somra Mahto,a farmer near Chandil,echoing the sentiments of many other farmers.

Although they were in complete darkness about the common demand of the political parties to declare Jharkhand as drought hit,a social activist Randhir Adhikari claimed that it was nice that these politicians were sensitive to the cause of the farmers.But in the process,a section of the officials and contractors tended to use the drought like situation to create atmospherics so that the state government sanctions funds for them to gobble it up.

“Every year these people created a storm in the name of drought with an aim to make fast buck.The scene is no different this time”,laughs Adhikari.

Officially,however,paddy sowing was taken up “in around 32 percent of the land dedicated to the crop in the state.”