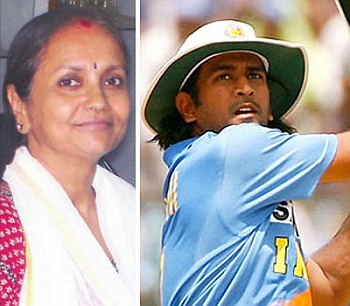 This teacher had not got any award. But among the many tokens of gratitude that she had received from students over the years, there is one from her star pupil too: A piece of paper that reads ‘Luv and Luv to Mrs Kumar’.

She is Sharmishtha Kumar.She has been teaching commerce and finance at the DAV School Shyamali in Ranchi.During her career as a teacher,she has followed the careers of her students closely and now retains a piece of paper in which Team India captain MS Dhoni had once written these words for her.”It is a prize possession for me”,she says.

“The next day when he turned up in class, I scolded him for being absent. He stood quietly with his head down. His friend Gautam then told me that he had hit a ton. That day I realised that Dhoni was unlike others. He was gentle, obedient and not boastful,” says Kumar.

Kumar says she saw in Dhoni a “determination to realise his dream to represent the Indian team”, but she says she explained to him that accounts and business studies were subjects that a student could not grasp easily if he missed even one lecture. “But whenever he attended class, he listened to my lecture attentively. That’s why even with the amount of time he had to spend playing, he managed to score average marks,” says Kumar who has been teaching at the school since 1993.

Kumar, 53, did her graduation and post-graduation from Ranchi University in 1978, before joining Jamshedpur Woman’s College as a lecturer. She quit in 1993 to join DAV school where she teaches economics, accounts and business studies.

As teachers, they shaped careers, and then moved on to another class, another child. We track down a few teachers whose students went on to make a name for themselves.

In her long innings as a teacher, she has noticed many changes in the profession and in her students. For one, her salary has more than doubled. Then the students today behave differently. ‘In the past, the students spent time reading, playing and gossiping with friends and parents. Now that nearly every house has laptops, computers and cell phones, they are hooked to social networking sites,’ she says.

As a teacher, Kumar says, she too has changed. ‘Earlier I used to yell at students to control them. Today, I am calm and composed because I think as a teacher my job is not just to lecture, but also to encourage students to find out what they are best at,’ she says, adding that once she recognised Dhoni’s potential lay in cricket, she encouraged him to work at it.

Later, when Dhoni cracked his maiden one-day hundred against Pakistan at Visakhapatnam on April 5, 2005 and became a star overnight, he returned home to be felicitated at his school.

‘He came with his family. I gifted him a Parker pen. When he was asked to speak about our commerce class, he said, `My pen, given to me by my class teacher Mrs Kumar, will say whatever has to be said’. And then he signed autographs with that pen,’ says Kumar.