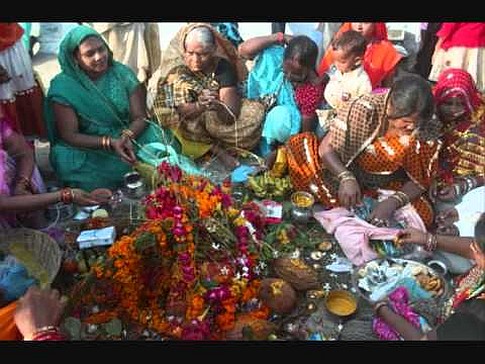 Radha Devi,who works as a staff in the state government office in Ranchi has two sons.While attending to her duty in office today,she was fast to observe annual festival -Jivitputrika Vrat.

Vrat is also known as Jiwit Putra or Jitiya fasting.As per the tradition among the Hindus,it is observed on the eighth day in the waning phase (Ashtami of Krishna Paksha) of the Ashwin Month.

Invariably Jitia date is September 27. Like Radha,many women keep Jitiya Fast for the wellbeing of their sons in North India, especially in Bihar, Uttar Pradesh, Chhattisgarh, Jharkhand and Madhya Pradesh.

At 9:31 PM tomorrow,they will break the fast to mark end of the festival.

Jitia in the form of a red and yellow thread is worn by mothers who undertake this fasting. The thread is removed only when it is worn out.

Incidentally,fasting is not dedicated to a particular Hindu deity. “The main aim of the Vrat is the long life of sons. After early morning bath and prayers, mothers start the fast and do not take any food during the whole day”,says Gudia.

“Usually, Jitia fasting is performed as community puja and there will be bhajans and narration of Jivitputrika Vrat Katha. The rituals associated with the Vrat vary from region to region but the purpose is the same”,she adds.