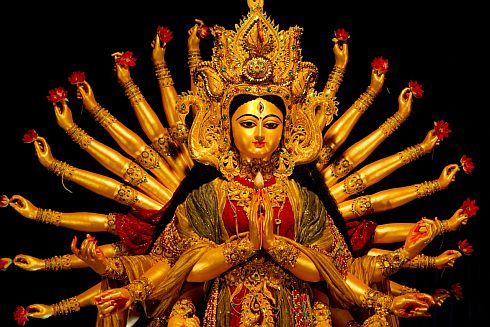 Navratri,a festival of Hindus is celebrated with devotion,love and fervor across India. The festival has began today with puja and fast kept by the devotees.They will continue to perform puja and keep fast for nine nights(Nav meaning nine and Ratri meaning night),each night devoted to the reverence of Godddess Durga.

According to Hindus beliefs, Maa Durga exists in various forms and is the manifestation of the absolute energy that pervades in the Universe. During these festive days prayers are offered to Mother Goddess.

For the devout,these nine days are the sacrosanct, when Goddess Durga takes a stock of her devotees and grants all blessings, removes ills and evils and ensures problem free life for her devotees.

All the beliefs are celebrated as Durga puja, the victory over the mythological demon named Mahishasura. Like many parts in eastern India,Ranchi and its adjoing areas get charged with Durga puja festivity.

However, the Adivasis in Jharkhand, other than those tribals who were Sanskritised,do not celebrate Navratri or Durga puja. Among the Adivasis,there were many mother goddesses-Chandi,Devi and so on.But none of the Adivasis,divided along 29 tribes,celebrated Durga puja.They do not keep fast during Navratri either.

“We neither observe Navratri nor celebrate Durga puja. It is not the part of our tradition”,said Amita Munda,wife of late Dr Ram Dayal Munda,Padam Shri.”In some areas goat was scarificed on the day of the Navmi(Ninth day of the Navratri).”

Among the Santhals,”Dasai” festival was celebrated after the Navratri .A Santhali folklore has it that once upon a time the loot of paddy crop of a Santhali family led to a war.The king lost it prompting a woman of the village to mobilise people and defeat the looters.To mark the victory,Dasai was celebrated”,said Parul Hembrom,a school teacher.