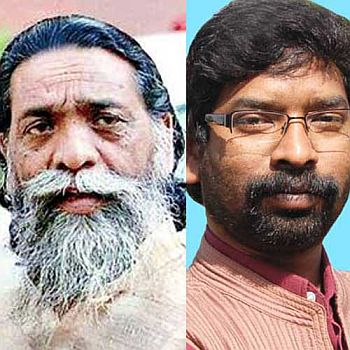 Hemant Soren will visiting religious and historical places around Mumbai with his family and is slated to return to Ranchi on October 14. In the process he skips the crowd pulling burning of the effigies Ravan, Meghnath and Kumbhakarna at the sprawling Morahabadi madian in Ranchi on “Vijaya Dashmi”.

The fiery destruction and other functions organised every year by the Punjabi Hindu Biradari (since 1947) of the capital on occasion draws a huge crowd not only from the city but also from neighbouring areas. The figure of spectators could be well beyond half a lakh though the rains have been predicted.

The refugees who had come to the city at the time partition from West Pakistan had started this tradition.

Traditionally the Chief Minister has been the Chief Guest at the function but in 2008 Sibu Soren’s refusal to burn the effigy of Ravana, whom he termed as his “kulguru” and a great scholar had put the organisers in a spot, as they had tough time finding a willing VIP.

However, in 2006 Sibu Soren then a Union Minister was present at the function but the Chief Guest at that time was the former chief minister Madhu Koda!

This time around, however Hemant Soren skips the programme, without making statement, as his father had done in 2008. On the face of it, he was going with his father. The Punjabi Hindu Biradari leaders had called on the Chief Minister to be Chief Guest at the function on Vijaya Dashmi day. These leaders are claiming that the Junior Soren had assured them of his presence.

Now of course the organizers have to look for alternative as the “demon goes on fire” October 13 and Soren returns on October 14, as it has been officially announced.

The effigies, as in the past, was being prepared by Muslim artisans and their tribal helpers. In fact, Muslim artisans were preparing  similar effigies in other parts of the capital city as well. They were making attractive figures by working on bamboo, jute ropes and paper.

Two other popular sites in the capital were at Argora which has also been organising a popular show for the last 47 years almost competing with Morabadi grounds function in scale and at the HEC complex where it was being organised since 1967.