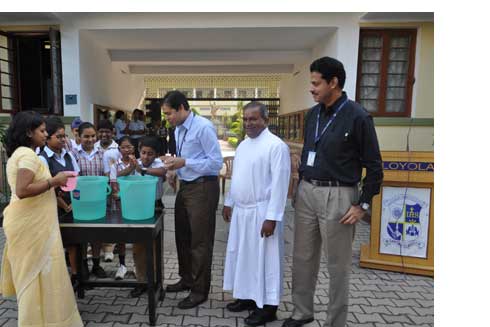 A simple act of hand washing with soap before eating food and after defecation can prevent 15-20% of child deaths every year. This is equivalent to saving about 6,000 children from death every year in Jharkhand. The major killers of children are pneumonia and diarrhea. About 30% of pneumonia incidence and 40% of diarrhea cases can be prevented by washing hands with soap.

This information was given by Job Zachariah, Chief, UNICEF Jharkhand while addressing students of Loyola school & ADL Sunshine Schools in Jamshedpur to mark the Global Hand Washing Day celebrations. Hand washing with soap can also prevent typhoid, worm infestation, jaundice and skin & eye infection. Besides preventing death and diseases among children, it will avoid school days lost due to illness.  Hand washing with soap before eating and after defecation is one of the major objectives under the newly launched Swach Bharat Mission.

Stating that children are powerful agents of change in family and community, Mr. Zachariah sought the support of students to promote this practice. “If a daughter asks her father to wash his hands before eating food, which father will ignore it”, he asked.

One crore virus in dirty hand

Kumar Premchand, WASH Specialist, UNICEF said that handwashing with soap is the most cost effective and simple way to prevent diseases.