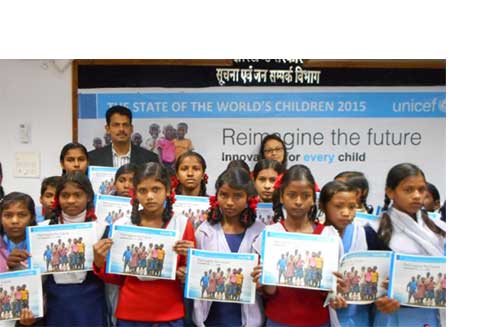 The UNICEF 2015 global report “Re imagining the future” was released in Ranchi today.

The report carries facts about the child reporters of Jharkhand.

In fact,the Report marks the 25th anniversary of the Convention on the Rights of the Child (CRC), adopted by the UN General Assembly in November 1989.The CRC articulates the rights of children and assures them that everything in the power of adults will be done to protect and promote rights of children. The UNICEF report for 2015 depicts the gains achieved around children so far and the challenges ahead.

Has Jharkhand become a better place for children after adoption of CRC?

Job Zachariah, Chief of UNICEF in Jharkhand said that the state has made significant progress in advancing child rights in the last 14 years since its formation in 2000. The infant mortality rate declined from 70 per 1000 live births in 2000 to 36 now. Over 10 lakh children were not attending school in 2000 compared to universal enrolment in class 1-8 now. Full immunization of children was just 9% and institutional delivery mere 14% in 2000, which improved to 70% and 46% respectively in 2013”, he said.

However, in some areas, the achievements have not been substantial. The rights of lakhs of children, especially SC and ST children, in Jharkhand are violated every day. About 44,000 children below 5 years die every year in the state and half of the children below 3 years are malnourished. About half (45%) of students drop out from school before completing class 8. About 1.6 lakh girls below 18 years are married every year and there are over 4 lakh child labourers in the state. More than 90% of the people in rural areas do not have toilets.

The UNICEF report calls for brave and fresh thinking to address pressing problems faced by children. It urges the government, businesses and communities to find new ways and scale up innovations to ensure rights of children.

The Report highlights innovations which includes ‘solar ear’ rechargeable hearing and battery charger; a model for community based management of acute malnutrition; floating school for children living in  flood-prone regions; ‘vibrasor’ a navigator for hearing impaired people; and a urine powered generator.

The release was attended by Moira Dawa, Communication Officer, UNICEF and 25 child reporters from Ormanjhi & Namkum blocks of Ranchi.