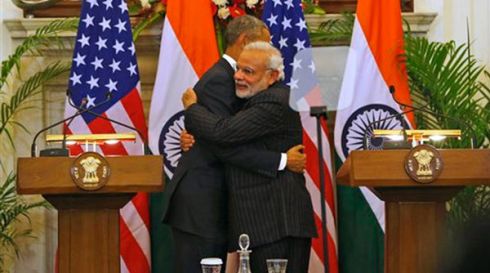 The U.S Ambassador to India Richard Verma today spoke about sustainable development summit on “The Agreement the World Needs”at Taj Palace Hotel in New Delhi.
His speech reflecting the U.S.A’s stand on the subject is as follows:
.
“I would like to make four quick points. First, climate change and clean energy was a significant component of the summit meetings between President Obama and Prime Minister Modi. There has been a convergence of interests and stories about climate change and its impacts on both our countries.

Second, let me note that while developing countries emit over 60% of global emissions, the United States recognizes its role in contributing to the problem and so has taken a leadership role in mitigating greenhouse gases. The U.S. experience has proved that economic growth and emissions reductions can go hand in hand. For example the U.S. economy is 60% larger than it was in 1995 but carbon emissions have returned to 1995 levels. This demonstrates that we can create jobs for the future by investing in a healthy economy today.

We are targeting emissions from the largest sources of pollution – transportation and power plants – which enables us to reduce emissions almost 28% from 2005 levels by 2025. Significantly, this ambitious target doubles the pace of U.S. carbon pollution reduction between 2005 and 2020.

These commitments are consistent with achieving the deep economy-wide reductions that we need to take by 2050 and this trajectory is consistent with the goal of keeping warming below two degrees Celsius.

Promoting greenhouse gas mitigation is not limited to the Federal Government. Nearly a dozen U.S. states are also implementing their own market-based programs to cut carbon pollution. More than 25 states have energy efficiency targets and more than 35 have clean energy targets. And over 1,000 U.S. mayors have signed agreements to cut carbon pollution.

Third, we are excited about India’s ambitious commitments to renewable energy, including its target of achieving 100 gigawatts of solar capacity by 2020, as well as the new and existing cooperation between our two governments.

But even before the President’s visit last week, we were already cooperating with Indian on energy access and clean energy. We created several new initiatives when Prime Minister Modi visited us last September and we also announced our intention to open up new paths for cooperation on areas like air quality and climate resilience.

Here are some examples. The U.S.-India Partnership to Advance Clean Energy has already mobilized over $2.4 billion. The Export-Import Bank is ready to make an additional $1 billion available to finance clean energy and the U.S. Agency for International Development is helping to build the capacity of India’s power grid to integrate renewable energy.

We are also developing a Climate Fellowship. We came out with a strong joint statement on what we can do together in Paris, and we reaffirmed our commitment to make concrete progress to phase-down HFCs (hydrofluorocarbon) under the Montréal Protocol.

And we have moved closer to the day when U.S. companies can begin the construction of modern and clean nuclear power plants.

These are just some of the actions we’re taking together to ensure Paris is undergirded by action on the ground.

Finally, let me articulate some principles that will be the foundation of a successful agreement.

Quite simply, if we do this right, we can conclude a lasting agreement that applies to all countries, that includes ambitious mitigation targets and a strong accountability system to see those targets through, including monitoring, review, and sound rules that promote trust. The agreement should have a lasting structure that regularly brings countries back to the table to commit to stronger and stronger targets.

A successful agreement will elevate the importance of adaptation and resilience, with a focus on better planning and more support for implementation. It will promote significant support for those countries that need it most. It will create opportunities for countries to take new action to protect their forests and other lands.

The agreement must be fair, so that every country is spurred to do the most it can do, but none is forced into action it sees as inconsistent with the imperatives of development, growth and alleviating poverty. Yet it will recognize that without action to address climate change, these vital social goals will become harder and harder to attain.

The benefits of a successful agreement for the world and for India are tremendous: better health, energy security, resilience, climate security, food security, ecosystem health, and sustainable economic growth. India and the world will benefit as much, and India as much as any country will benefit from a strong and comprehensive agreement this year in Paris.

We look forward to working with everyone over the coming year to ensure we conclude an ambitious climate agreement in Paris in 2015.”