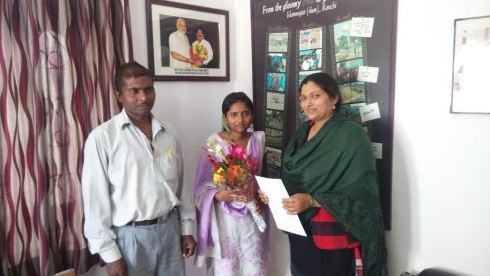 Every body knows that wind-turbine capacity,particularly for offshore turbines,continues to grow each year with 6 to 10 MW on the horizon. Even with efficiency improvements,key power generation subsystems —including generators,power-conversion electronics and transformers—are challenged to manage ever increasing heat within limited nacelle space.

In addition, even if incurred power losses are as little as 3 to 5%, thermal management systems would have to dissipate 200 to 300 kW and more of heat.

Against this backdrop,Nishu Kumari, a Class X girl from Jamshedpur,is said to have invented wind-powered air cooler.

Her work is claimed to have been studied and recognised and now she was invited to visit Japan under ‘Sakura Exchange Programme’.Today,Parimal Nathwani,Member of the Rajya Sabha,congratulated her.

Nathwani said, “Nishu Kumari, a budding technocrat and a student of standard tenth at Jamshedpur, who has been selected to visit Japan by the Government of India under ‘Sakura Exchange Program’ visited my office at Ranchi yesterday. I was away in Delhi. But I got her felicitated on my behalf by my office.”

Nishu,claimed a report,converted the idea of using a fan and running water on mattress to control heat in summer to prepare a wind-powered air cooler. The low-cost cooler can be useful in many rural areas lacking electricity.

“Her visit to Japan will provide a unique exposure and bring out the best in the girl with scientific temperament”,said a report prepared by Nathwani’s Public Relation Office.