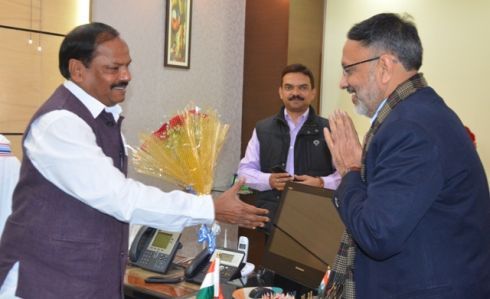 A gentle wind of change is blowing over the Project Bhawan in Ranchi,heralding a silent financial reform seeking utilization of funds approved by the State’s annual budget in Jharkhand.

The decade-old bane of surrendering hundreds of crores of rupees is now considered to be a thing of the past in the State Finance Department.The impact of the lapse of fund had made the Centre look down upon this State.

Even in Jharkhand,the process of development was blocked with the State government failing to spend less than 30-40 percent of th total fund approved by the annual plan.This lapse continued for years,flashing poor governance and evoking widespread criticism in public.

In only one calculated initiative,the state government headed by Chief Minister Raghubar Das introduced a reform after approving the financial rules suggested by Gauba and notified by Pandey.

As per the reform,the delay in fund approval of the development scheme made by the state finance department was almost deleted by empowering the concerned authorities so that they utilize the fund at the and the District and Department level.

In the past,these functionaries lacked power to approve multi crore rupee projects.Even the Secretary,who was top officer of the Department lacked any authority to draw and fund a development scheme.And as such,they were dependent on the Finance Department for the schemes’ approval.This was taken note off and the financial power of Department’s Secretary and its Minister was strengthened.Result?

The Department’s Secretary was empowered to approve upto Rs five crore project.The Minister was authorized to pass and approve any scheme carrying the fund requirement of over Rs 5 crore and upto Rs 15 crore project.

Similarly,the state Planning Commission,acting on the recommendation of the Department’s Minister,can approve any scheme carrying the fund of over Rs 15 crore and upto Rs 25 crore.More,the the state Cabinet was capable to approve any project worth any amount of fund.

Another milestone decision was to empower the Department’s Ministry with a power to increase the outlay of the project following recommendation from the concerned Department.

An equally important decision taken by the Das government was to come with a provision allowing the Divsisional Commissioner,Department Head and Deputy Commissioner of the District to approve upto Rs five crore,Rs one crore and Rs one crore projects respectively.

“This reform has begun to make impact on utlisation of the funds meant for development projects.By the end of 2015-16,the state government will be able to utilize almost cent percent fund”,said Randhir Sarkar,a retired offer of the state finance department.

This is heartening mainly because millions of people suffered from poverty,illiteracy,darkness,roadlessness and backwardness in Jharkhand despite its rich land and availability of lots of fund.The financial reform introduced by the Das government is bound to benefit the State and its people.’Johar.’