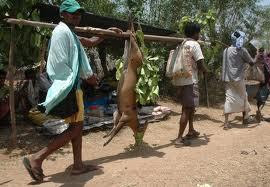 Call it a horrific practice.And try to end it,if you think so.

April 1 is celebrated across the world every year as a day when people play practical jokes and hoaxes on each other marking it as ‘Fools Day’.On this day this time,forest officials in Jharkhand will have to be duty bound as the tribals will go on a hunting spree to celebrate their annual festival- Vishu Shikar.

Vishu Shikar (popularly known as Sendra) is going to be held for three days beginning April 1.Several tribal groups including the Dalma Sendra Samiti and Dolma Buru Sendra Samiti who were actively involved in the hunt said the Sendra will be held as per the tribal tradition.

As pre the tradition,it empowers the tribal community of the state to send its persons -boys and girls-armed with traditional armaments on a ritualistic mass hunting adventure.As such,many of them are bound to kill animals and birds in forest areas.

As it is,according to the tribal tradition,many of them do so with a style. Armed with spears, arrows, axes, and other traditional armaments they mark the traditional festival sacrificing most of the wild birds and other animals that happen to come in their way to, as per their faith, please the local deity called as Dolma Baba.

Under these conditions any one living far away from the state remains in a sound position to comment that there in Dalma wild animals are reared for Sendra only … don’t talk of conservation.”It is too shocking to say the least.More so because even the tribal leaders who stand to protect nature,don’t speak against this anti animal festival”,says a senior Forest officer.

The state government’s Department of Forests has mentioned in its report on its website “… also known as Jani Shikar usually held on April 14 which is a New Year Day when the people go to the forest sides and kill the animals as a mark of jubilation on the occasion of New Year.Also, they remove the mud from the ponds and sprinkle among one another so that the rain/flood waters may be stored in ponds.

Indeed,such practices of hunting are a threat to the wildlife and should be discouraged as a part of ritual. Like the past years this time again the forest department is set to launch several awareness programmes among the tribals against the killing of wild animals.