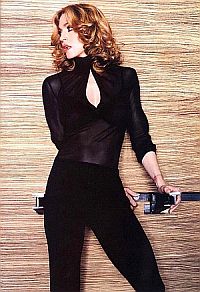 When she performs Madonna turns the audience crazy.This time 54 year old pop singer zapped the American audience at Washinghton DC on Monday night,when she performed only to exhort them to vote for President Obama because she said he is a “black Muslim.”

The ANI quoted her saying:”Y’all better vote for f**king Obama, OK? For better or for worse, all right?”.

Even the Fox News quoted her as saying. “We have a black Muslim in the White House! Now that’s some amazing s**t,” she said.

More,the pop queen stripped down to her bra to reveal “Obama” stenciled in big letters on her back, before promising: ‘When Obama is in the White House for a second term I’ll take it all off’.”