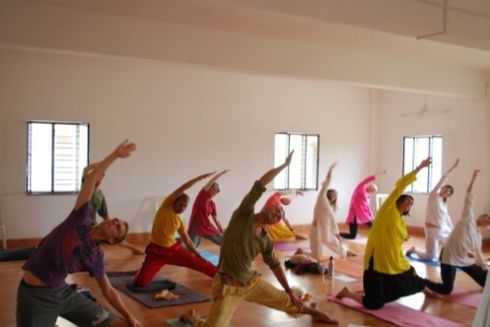 Come June 21 and the Yoga master Mukti Rath will be busy holding Yoga class among the people at Morahabadi Maidan in Ranchi.”We are going to hold an international Yoga day by making hundreds of people do Yoga together”,said Mukti Rath.

Like Mukti Rath,many Yoga teachers are busy these days.All of them had been booked by the management of of schools,colleges,state government and NCC to observe Yoga programme on June 21.”We are on Cloud 9”,said Mukti Rath.

Even the state police forces and the Centre’s Inteligence Bureau staff are preparing the programme for the Yoga day.

”The entire office and its garden are being cleaned.We will hold the Yoga session in the morning on June 21”,said a staff of the Police line in Ranchi.

As it is this is for the first time World Yoga Day will be celebrated across Jharkhand.In fact, India among 192 countries will observe it simultaneously on June 21, making it the biggest ever event for which the India Government has applied to the Guinness World Records.

The proposal was passed exactly 75 days later in December last year, with not a single country opposing it, creating a record of sorts.