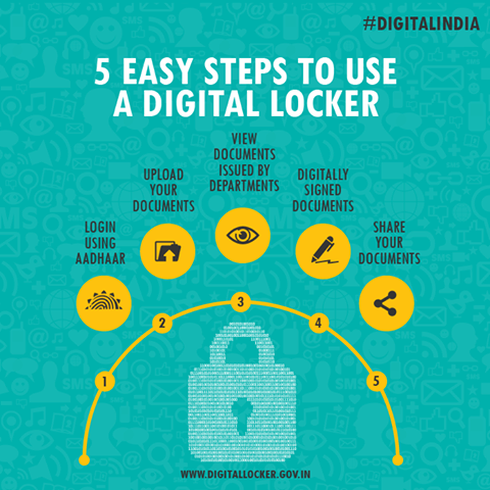 Come July 1 and the people in India will get a platform to maintain their records safely-Digital Locker.

Prime Minister Narendra Modi is slated to inaugurate Digital Locker.It is part of his initiative under Digital India Programme.Though the online lockers have been around for some years now,it can securely save a variety of digital files in a virtual space.

So far,the popular Digital Lockers such as DropBox and Evernote were well known.Each offers a citizen an offer to send and receive files. Extra storage and services are most often paid

Like other online lockers, DIGILocker too lets users store their documents in a secure online locker. The service, operated by the Department of Electronics & Information Technology (DeitY) of the Ministry of Communications & IT, has been running in beta for a couple of months, and will be launched formally by the Prime Minister on July 1.

It will allow users to store all kinds of “government issued” documents, ranging from PAN cards to maybe utility bills and property documents, online. Indian citizens will be able to avail a maximum of 10MB storage space, using their Aadhaar numbers to sign up. Once the Aadhaar number has been entered, a one-time password (OTP) will be sent to your registered mobile phone to initiate the first log-in. After that, users would be able to set their own passwords, and line the account to Google and Facebook for easy access in future.