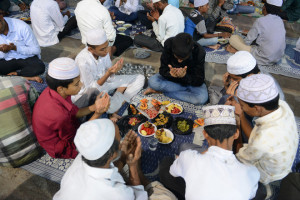 In a bid to bring the widows into the mainstream of Indian culture, the Sulabh International organized an Iftar party at its headquarters in the national Capital.

Breaking the barrier, widows of Vrindavan took part in the party in which members of the Balmiki community also participated.

Twenty-five widows of Vrindavan for the first time took part in the Iftar party which was attended by nearly 150 people from nearby Hermathala village of Mewat district.

The Iftar staple ‘khajoor’ or dates to break the fast was served by the widows which was followed by a delicious meal consisting of various kinds of pakoras, fruits and kheer besides sherbat.