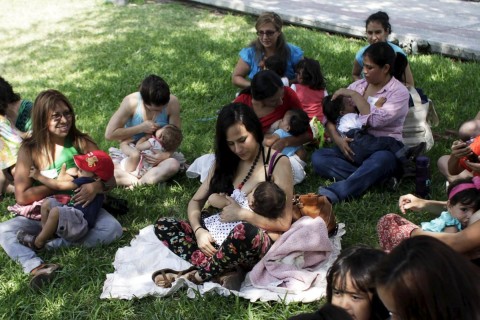 Continuing with its efforts to promote breastfeeding, Nestlé India has launched a series of initiatives coinciding with the ‘World Breastfeeding Week’.

These initiatives aim to provide impetus,drive further awareness and create a supportive environment that enables mothers to breastfeed for longer.

Binu Jacob, General Manager, Nutrition, Nestlé India, has said, “Continuing to breastfeed for optimal period is not easy for new mothers as she is expected to take care of household responsibilities as well as the babies’ needs. Some mothers also have the additional pressure to get back to employment.

It has been found that by the time the baby is 6 months old, the rate of exclusive breastfeeding drops to less than 30%. New mothers need support so that they can continue breastfeeding and give the child a healthy start to life. Nestlé believes that breastfeeding is not just a mother’s responsibility.”

Nestlé is focusing on the theme ‘Breastfeeding isn’t just a mother’s responsibility’ to trigger and facilitate change in the mother’s support, environment. There is a need to create behavioral change within immediate family members and the community to provide support system for new mothers. The four key areas where the initiatives focus are:

Drive Awareness: It has launched an awareness campaign reaching out to fathers, grandmothers and employers on how their support such as sharing household responsibilities, taking care of the baby and creating a conducive work environment can help the mother to sustain breastfeeding for longer.

Facilitate Public Breastfeeding: New mothers frequently visit paediatrician’s clinics and often have to wait for long durations without a proper place to breastfeed. This inadvertently becomes a barrier to sustain breastfeeding. In an effort to overcome this barrier, Nestlé has pledged to install 500 lactation booths across the country.

Build Community Support: Nestlé India together with MAMTA Health Institute for Mother and Child, a Delhi based NGO have rolled out the SwasthJananee, SwasthShishu program to educate and encourage communities to support breastfeeding. The program is being run in West Delhi and will reach out to over 100,000 people living in an urban slum.
Ensure Favorable Work Environment: Nestlé has announced a new Maternity Protection Policy last month. It gives a choice to extend maternity leave upto half a year and includes employment protection, flexible working arrangements and access to breastfeeding rooms during working. Nestlé currently has more than 190 breastfeeding rooms across its global working facilities.

Start Healthy Stay Healthy is a science-based educational initiative by Nestlé which, in partnership with doctors, focuses on the lifelong impact of breastfeeding and the first 1,000 days of life.