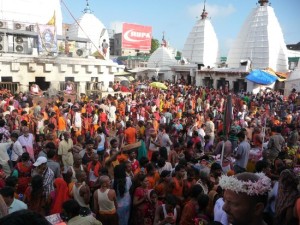 In a meeting presided by Jharkhand Chief Secretary Rajiv Gauba,a decision was taken to adopt the Tirymala Tirupati Devasthanam system for offering Puja at Bhagwan Baidyanath Dahm temple in Deoghar.

At Tirupati,visiting and offering puja before the Lord has been made a whole lot easier with the Tirumala Tirupati Devasthanams (TTD) making tickets for the coveted darshan available offline and online,both.

These special Darshan tickets, which cost Rs 300, aim at reducing waiting time.It is by far the biggest hurdle that a devotee faced at Tirupati. But after the new system was introduced,special entry darshan tickets helped book a minimum of one day in advance and a maximum of 14 days.

The same system needs to be followed at Deoghar,resolved senior officers led by Gauba in a meeting held in Ranchi today.Gauba said it is the responsibility as well as the top priority of the state government to provide pro visitor service to devotees.”I want to see this at ground zero”,observed Gauba.

“We have to adopt the same system of management available at Tirupati.This will make devotees perform puja at baidyanath Dham temple in Deoghar easily”,said Gauba in the meeting held inside the Project Bhawan in Ranchi.The meeting was attended among others by officials of the tourism and urban development departments.