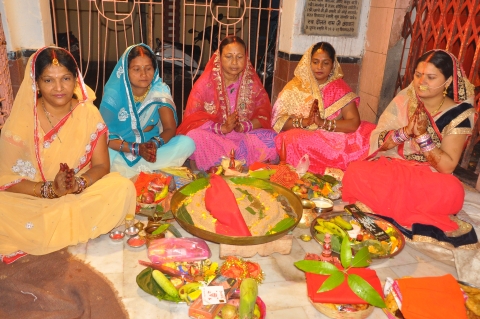 The Hindu married women today observed and celebrated an annual festival- Teej.
The festival was marked by these women for the whole day and the night with a wish of long and healthy life of their husbands.

In fact,the Teej festival is celebrated to remember the reunion of Lord Shiva and Goddess Parvati as his wife. It is a series of festivals which is celebrated for seeking the blessings of Gods for marital bliss during the Hindu months of Sawan and Bhado.

After worshipping the Lord Shiva,the fast is broken by the married women and Prasad in the form of Padakiya and Thekuwa are distributed and consumed by husbands,relatives and friends next day and the morning,

Traditional belief is that the name of the festival comes from a small red insect called ‘Teej’. This red insect emerges from the Mother Earth during the monsoon season. As per the Hindu mythology, Goddess Parvati came to Lord Shiva’s abode marking the reunion of husband and wife. To honor the sacrifice of a wife (Parvati) all married Hindu women observe fast for the long and healthy life of their husbands.

Types of Teej
There are 3 types of Teej festivals which are celebrated during the monsoon months:

1.Hariyali Teej or Chhoti Teej which falls on Shukla Paksha Tritiya or the third day of the bright fortnight of the Hindu monsoon month of Shravana.

2. Kajari Teej which is also known Badi Teej. It comes after 15 days of Hariyali Teej.

3. Haritalika Teej comes one month after the Hariyali Teej which is observed on the third day of the bright fortnight of the Hindu month of Bhadrapada.

Significance of Teej
According to the mythology Goddess Parvati, in order to prove her love and devotion for Lord Shiva carried out a rigorous fast for 108 years. It is mainly celebrated in Nepal and the North Indian states of Uttar Pradesh, Bihar, Rajasthan, Punjab and Haryana in various ways. The festival has a two-fold significance: it celebrates the victory of a wife’s love and devotion towards her husband- symbolized by the reunion of Lord Shiva and Goddess Parvati. The second being the arrival of monsoon with Teej festival that brings a good reason to take a break from the sweltering heat. The festival also provides a good opportunity for renewing family bonds.