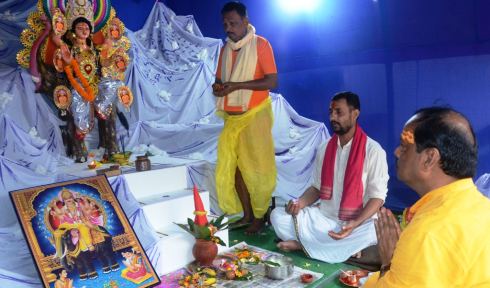 In Ranchi,Jharkhand Chief Minister Raghubar Das,who greeted them,himself offered prayer and observed the Vishwakarma puja as all offices,factories and plants remained closed.Even the newspaper offices and printing press were closed across the State.

As it is ,Vishwakarma Puja is perhaps the only festival celebrated in remembrance of the architect god Vishwakarma. As per the Hindu mythology,God Vishwakarma is the divine craftsman who created all the palaces of Gods along with their vehicles and weapons, including Lord Indra’s weapon – the Vajra. This festival day, which is celebrated as the birthday of Lord Vishwakarma, is a major festival for artisans and craftsmen and most of the factories and shops remain closed.

The celebrations start with the Aarti early in the morning to invoke the craftsman god, asking for his benevolence and inspiration to create and innovate. Usually, this Puja takes place in the factory premises or within the shop. On this day, all artisans and craftsmen worship their tools and keep them in front of the idol of Lord Vishwakarma, so that the divine grace of the god is bestowed upon them.

Only a few people have proper knowledge about this festival, though it is quite a popular one especially in Orissa, Bihar, Rajasthan and Madhya Pradesh. That’s why only few people know that there are two days on which the Vishwakarma Puja is celebrated. The first one is celebrated on 16th or 17th of September and the next takes place exactly a day after the festival of Diwali. Both days are remembered as the birth day of lord Vishwakarma. The two days on which this Puja is celebrated are: