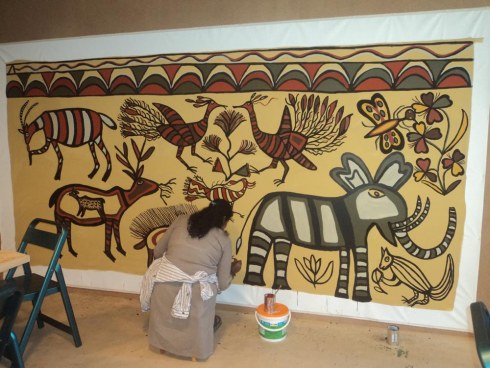 A good news is this.

Jharkhand State Secretariat is going to carry an ethnic look with the BJP led state government deciding to deck it up with the traditional tribal painting-Sohrai.

“This art form is ritualistic art done on mud walls to welcome the new harvest and also to celebrate the cattle. According to ancient mythology, Marang Buru (God of Mountain), Jaher ayo ( Goddess of Forest) and the elder sister of the Santhals, would descend on Earth from Heaven to pay a visit to their brothers’,states wikipedia.

So far,though Jharkhand was widely known as ‘home land of tribals’,its State Secretariat lacked a sign showing its tribal art and culture.

The art form of Sohrai is also going to be created,covering the main entrance of the Secretariat building from top to bottom measuring roughly 40 feet in height and 12 feet in width.

“The Sohrai Painting will be carried inside Fibre Glasses”,said a senior officer today.