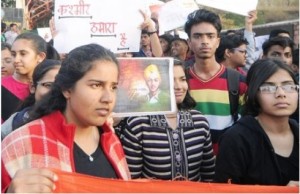 Teachers of 40 Central Universities today extended support to their counterparts and students in JNU protesting against the arrest of the varsity’s students union president in a sedition case.

Students of pune-based Film and Television Institute of India (FTII) also expressed solidarity with the agitators and accused the government of harassing and threatening those who dare to oppose its ideology.

Nandita Narain, president of Federation of Central University Teachers Association (FEDCUTA), said teachers’ bodies of 40 central universities, including Hyderabad University, have extended support to the agitation by the students and the teaching community of JNU.