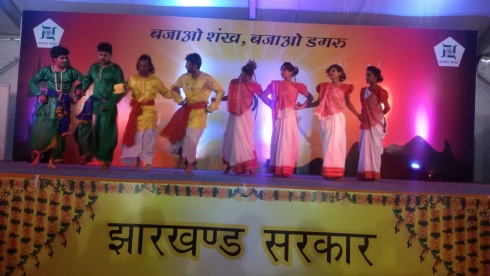 Ujjain Mahakumbh is heading towards its end.

To promote its tourism at the national level, Jharkhand government participated in a month long Simhasta Mahakumbh organised at Ujjain, Madhya Pradesh.

Thousands of people registered their presence in this grand religious event.A replica of Baba Baidyanath Dham (Deoghar) was installed at Simhasta Kumbh,thanks to Jharkhand Tourism Department.

The promotional materials related to Jharkhand tourism were available at TIC. Vegetarian cuisines of Jharkhand was available at the food court and traditional food arrangements were made available there by the State Government for the devotees.

TIC worked as a connecting bridge for the devotees of Jharkhand who visited Ujjain.Prasad Krishna Waghmare ,Director, Jharkhand tourism said, it is a good sign for Jharkhand tourism that large number of people had registered their presence in TIC at Ujjain Mahakumbh.

“Jharkhand government is committed towards providing all the facilities to the tourist who visit Jharkhand”,said a state government’s report.