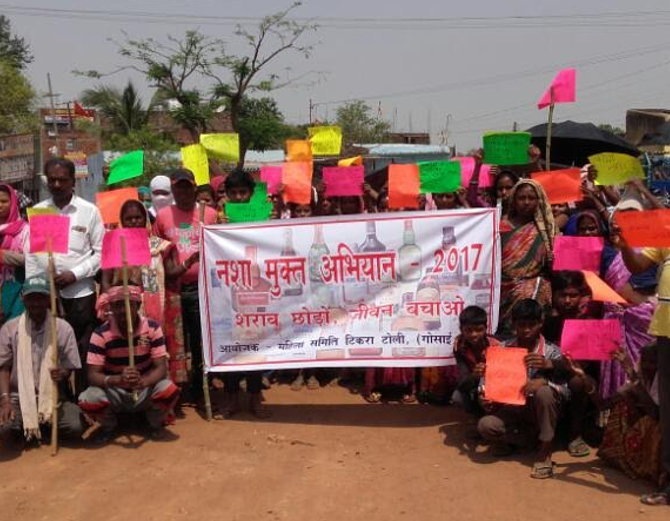 *Women holding a road show for alcohal prohibition at Gosai Tola under Nagri Block in Ranchi district,Jharkhand.Photo by Ratan Lal

Scores of Adivasi and Non Adivasi women took out a procession demanding prohibition of alcohol in Jharkhand.

Billed as 'Nasha Mukt Abhiyan(addiction-free campaign),these women belonging to seven Self Help Group took out a road show at Gosai Tola under Nagri Block in Ranchi district.They walked  and raised their common demand-prohibit alcohol and its consumption.

Many of these women told men to give up their 'habit' to consume alcohol.Many of them clapped when Mukhiya of Naro Panchayat Pancham Kispotha and Rameshwar Bhagat declared that 'those men who will dare to violate the liquor ban ordered by the people will be punished".

In fact,under pressure of these women,many men took oath that they will not drink alcohol.As it is,though their prohibition of liquor campaign has gained ground in many villages across the state,the Jharkhand,government led by Chief Minister Raghubar Das,unlike his counterpart of Bihar,Nitish Kumar who had banned it in Bihar,had not responded favourably.