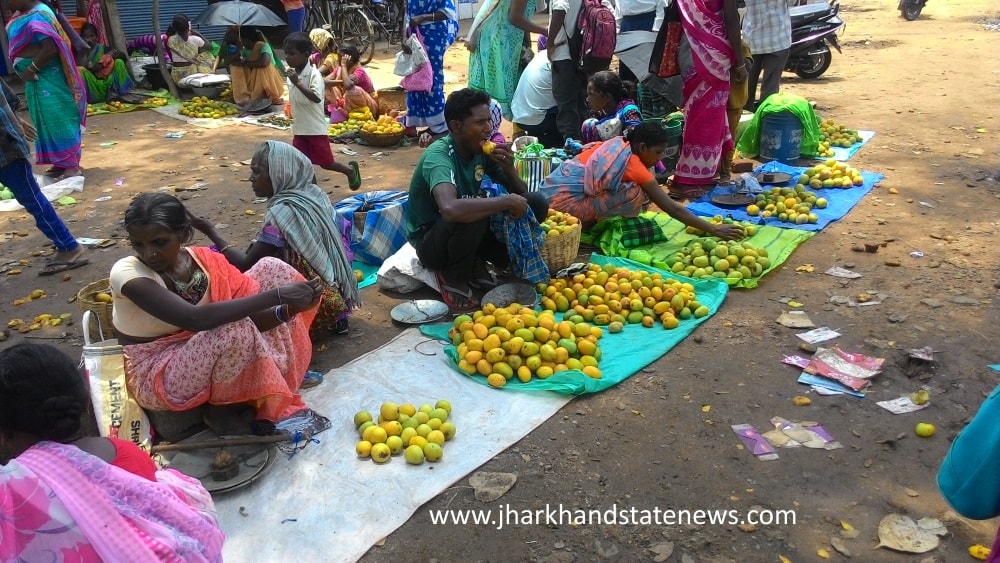 What has flooded village markets-Haat Bazars-these days in  Jharkhand? Mangoes.

The sweet aroma of this national fruit fills the air in all Haat Bazars.Unlike many varieties of mangoes- Malda, Ambrapali, Mallica, Jardalu, Bambaiya and so on grown either out of the state or under Centre's proto type project to provide special assistance to Adivasi villagers - Biju, a local variety, is being sold like a hot cake in Haat Bazars.

"After a gap of four years,Biju mangoes from forest areas are flooding the markets in villages",said Durga Munda,a resident of village in Ranchi.In Gumla,a visitor can find hundreds of fruit vendors selling Biju.

No wonder why, Adivasi women in every Haat Bazar, squat around with basket carrying small ripen, yellow, juicy mangoes,a common sight in all Haat Bazars.

In this state,while all types of mangoes are sought after,Biju,a traditional and organic mango,smaller in size,are consumed by sucking the pulp rather than cutting slice for eating.

Biju mangoes are usually found in the jungle and hilly areas of Jharkhand,especially in Khunti, Ranchi and Gumla.They are a major source of income for villagers during the season.

Adivasi women staying on forest villages move with baskets,each full of Biju mangoes over head to sell in the town.Initially they were being sold at 20 per kg but now its rate has come down to Rs 15 to 10 per kg.

Inside the village, kids pelting stones at mango tree or some shooting stones at the ripe mangoes or using traditional slingshot is a common sight these days.

With urbanization,forest is disappearing.Even the test and demand of Malda mango is learnt to be growing.However,the sad reality is the ancient Biju mango appears to be on the verge of extinction even though it has less sugar content.