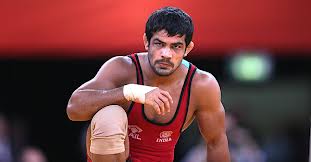 By refusing to accept millions of rupees worth offers for commercials promoting alcohol brands,Olympic medallist Sushil Kumar has gained accolades and evoked a public interest question-whether his illustrious compatriots in Indian cricket team can emulate him.

Though the answer is a big no since none of the cricketers worth his name had backed his stand so far,Kumar,speaking at his felicitation ceremony graced by Rajasthan Chief Minister Ashok Ghelot in Jaipur on Monday,reiterated that he had refused an offer for advertisement of an alcohol product.

Taking an apparent dig at some cricketers featuring in alcohol brands, Kumar,who had assured that India would bag more medals in the 2016 games at Rio de Janeirio,said celebrities were role models for the kids and endorsing such alcohol products would not send right message to the gen-next.

The mat man from Boprala, who lost to Japanese Tatsuhiro Yonemistsu in the final to settle for the silver in London Olympics, disclosed that his wife had got an offer to endorse for a product but she too refused.

The 29-year-old freestyle wrestler, who recently got the Colours People’s Choice Award, gave India its first wrestling medal in 56 years when he won the bronze at the 2008 Beijing Olympics.