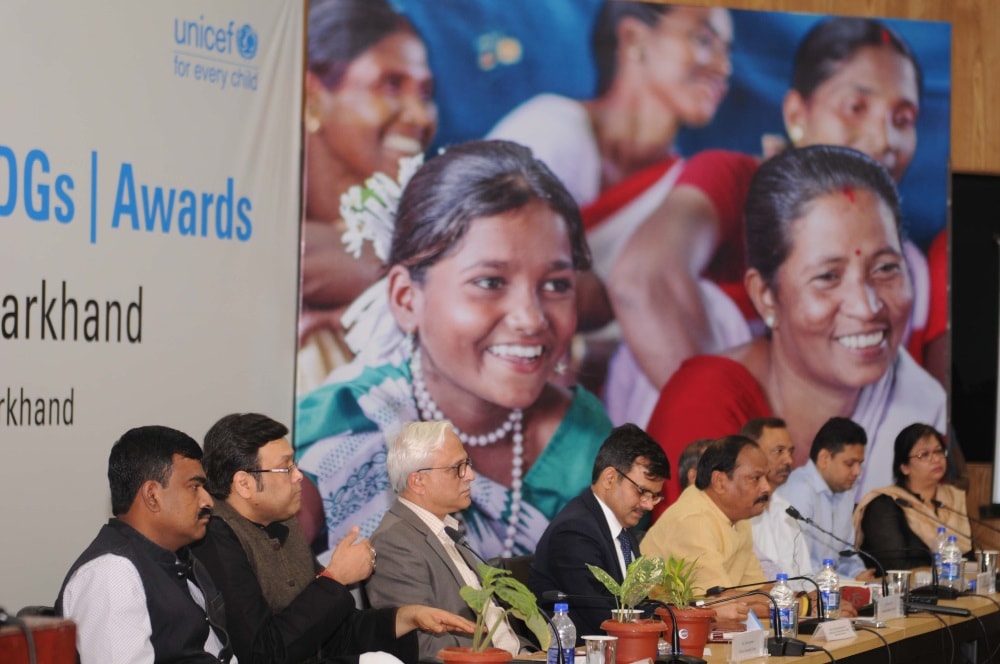 *All Images by UNICEF, India

The winners of the ‘Industry Champions for SDGs awards’ were awarded by Raghubar Das, Hon’ble Chief Minister of Jharkhand in the Project Bhawan auditorium today. The Government of Jharkhand in partnership with UNICEF had announced the ‘Industry Champions for SDGs Awards’ in August in partnership with UNICEF to recognize select companies that have inherently built-in child right issues in their business.

Speaking at the awards ceremony, Raghubar Das, Chief Minister of Jharkhand said, “The state has made significant progress in the areas of education, health, water and sanitation since the Jharkhand Corporate Social Responsibility Council (JCSRC) was set up in 2015. I call on the companies to contribute towards creating a New Jharkhand by helping reduce malnutrition, maternal mortality and infant mortality rates. I appeal to NGOs and the media to help increase public awareness especially in the most remote areas about the importance of nutritious diet for a healthy life.  A healthy Jharkhand is imperative for a prosperous Jharkhand. Jharkhand Govvernment has set a target of eradicating poverty and malnutrition by 2022 in line with the Prime Ministers vision of creating a New India.”

Dr. Madhulika Jonathan, Chief of UNICEF Jharkhand said, “The 17 SDGs are part of the 2030 Agenda for Sustainable Development, that seek to eliminate poverty and hunger, achieve good health, quality education, gender equality, provide clean water and sanitation, reduce inequality globally and tackle climate change over the next 15 years. The enactment of the Companies Act 2013, through mandatory provision of investment on CSR activities, has opened window of opportunity for engaging corporate in meeting state’s development agenda apart from their regular business. Constitution of Jharkhand CSR Council in the state has been a step in that direction. UNICEF has partnered with the Department of Industries to set up the Jharkhand Corporate Social Responsibility Council, and continues to provide techno-managerial support to the Council.”

S K Barnwal said, “The JCSRC aims to channelize CSR funds for overall development of the state aligned with the priority of state government. The Chief Minister has identified three priorities for the utilization of CSR funds. These are (i) malnutrition free Jharkhand, open defecation free Jharkhand and (iii) clean drinking water for all. Since the creation of the JCSRC, the CSR expenditure in the state has gone up from Rs. 247 crores in 2012-13 to Rs. 754 crores in 2015-16.”

He added, “The Industry Champions for SDGs awards are the first CSR awards in the state. A total of 12 winners were selected from the 42 entries in the following three categories (i) 2 winners in the Best Corporate Initiative category in the areas of education, child protection, health, nutrition, sanitation, livelihood and skill development, women’s empowerment, water and infrastructure (ii) 2 winners in the Best Innovation category and (iii) 1 winner in the Media for Child Rights Award category.”