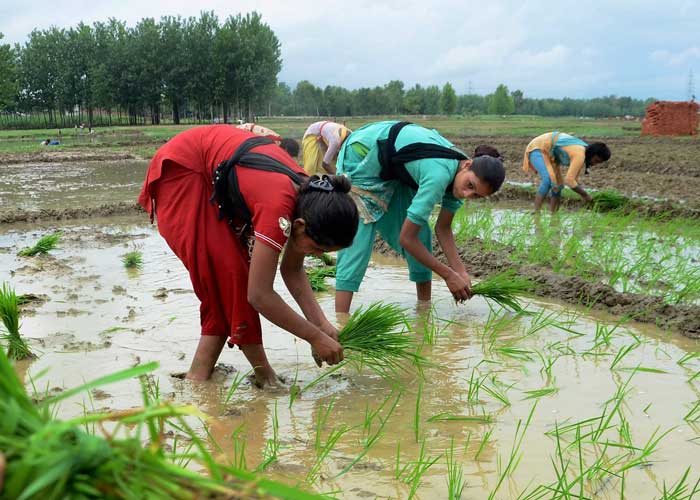 Women farmers have started sowing paddy in low lying land in Ratu and adjoining areas of Ranchi, capital of Jharkhand. Each keeping her legs in muddy water, they were singing while sowing the paddy plants in their fields, a feature common among these women farmers in Jharkhand.

This has taken shape now when mild to medium rains had occurred during the past one week after dry days of June-July,2019.

It seems monsoon has picked up momentum. The low pressure was formed in the Bay of Bengal making its effect visible in many areas of Jharkhand. During the past three days, the state capital has been experiencing drizzles and mild rains. This has generated hope among farmers in rural areas of the state. Even if the mild and medium monsoon rains lash the state areas in the coming month, paddy sowing in low lying fields can be completed.

Against this backdrop, agriculture scientists of Birsa Agriculture University, Ranchi, have issued bulletins, each suggesting farmers to sow paddy and other Kharif crops.

Though the water in rivers and dams in Ranchi-Kanke, Ormanjhi and Dhurva -was far below normal depth, the water level of these water bodies can go up if the monsoon rains continue to fall.

The Met Department expects monsoon to remain normal in the coming week. After a week, it is predicted to become active, bringing low and medium rains. Since June 1, Ranchi has received 312 mm against 310 mm rainwater in the state till July 28. As per Met data, Khunti, Garhwa and Godda have received 50 percent fewer monsoon rains during this period.