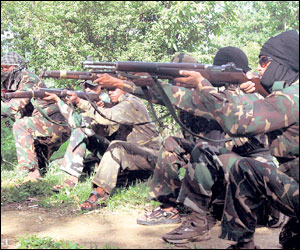 There is no wall write up,no poster.There was no press releases either.

But the buzz in the circle patronized by the Maoists had reportedly joined the Peoples Union for Democratic Rights (PUDR) and National Confederation of Human Rights Organisations (NCHR)in condemning the Vishwa Hindu Parishad and the Bajrang Dal celebrating the hanging of Afzal Guru.

“He(Afzal Guru) was not given fair trial.He was also not allowed to defend himself adequately”,says a social activist who was sympathetic to the CPI(Maoist),a banned ultra left outfit.

Incidentally,early during the day in Delhi,the students belonging to the Bajrang Dal and Vishwa Hindu Parishad burnt crackers and shouted slogans celebrating the hanging of Afzal Guru,the prime terrorist,who was convicted on charges of conspiring to launch attack on the Parliament in 2001.They were chased and violence erupted.

Like the Maoists,the Kashmiri students felt that Guru was not given a fair trial and accused the government of step-motherly treatment towards Kashmiris.