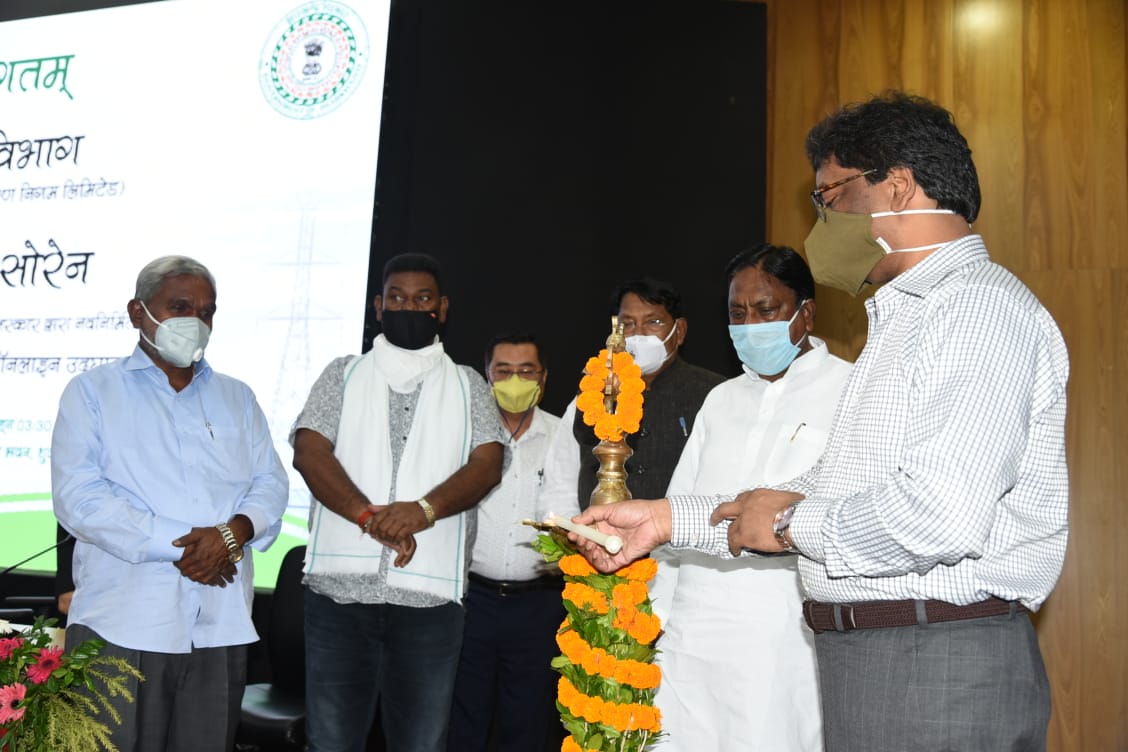 Considered as a historic achievement for Jharkhand in the field of power supply, 6 Grid Sub-Station can be a milestone in the development of the state. The project was launched by the NDA government led by the then CM Raghubar Das in the past.

The Chief Minister said that completing the work of these six power projects amid Corona pandemic was a big challenge, but the state government's determination and commitment made it possible.

With the commencement of these projects, a radical change is expected in the field of ​​power supply. The dependence on others for electricity supply will be reduced and the state will be able to supply electricity from rural areas to industrial units.

The Chief Minister said that electricity has become an important part of human life today. Without electricity, no development project can be imagined. Either for domestic or industrial purpose, electricity is very important. The state government is committed to ensure that every village receives uninterrupted electricity. The work of power projects has been expedited to ensure house-to-house power supply.

Soren said that these six power projects are major steps in the direction of an uninterrupted power supply. Garhwa district' power supply was dependent on another state, but now Bhagodih grid sub-station and transmission line has done away with this dependence.

At the same time, with the commencement of the Jasidih Grid Sub-Station, Deoghar will be able to get an uninterrupted power supply. Also, the construction work of AIIMS and Airport here has started. This will also promote tourism in Deoghar.

With the commencement of grid sub-stations and associated transmission lines in Giridih, Jamua and Saria, there will be no dependency on DVC for power supply in the Giridih district.

The Chief Minister said that DVC is more engaged in providing electricity mainly to the industrial fields, but never in rural areas of Jharkhand. Now the per unit rate will be only 3 rupees whereas DVC used to charge 5 rupees per unit of electricity.

The Corona testing has been expedited and continuous efforts are being made to improve the health system. He said that during the Corona Virus pandemic and lockdown, the government did the work of distributing food with food grains on a large scale. No people died of hunger in the state. He said that we have to convert this challenge into opportunity.

The state government has made several arrangements to ensure better health care of the people. He said that along with this battle against Corona, the system also has to be run.

The newly constructed grid at Bhagodih in Garhwa has a capacity of 300 MVA, while the Daltonganj-Garhwa transmission line has a length of 91 km. The total cost of this project is Rs. 123 crore and this will ensure power supply in the entire Garhwa district. With the commencement of this grid, the Rehla grid has been connected to the national grid at Daltonganj and electricity will be supplied according to the demand.

With the commencement of this grid and transmission line, the uninterrupted power supply has been ensured in the entire Deoghar and Giridih districts. The total capacity of the Jasidih grid is 400 MVA, while the length of the transmission line is 74.3 km and its total cost is Rs. 137 crore.

The newly constructed grid capacity in Giridih is 400 MVA and the total length of Jasidih-Giridih transmission line is 77 km. With the commencement of this, there will be quality power supply in entire Giridih district and partial areas of Koderma district. The biggest advantage of this is that there will be no dependence on DVC and the electricity rate will also decrease. The project cost stood at Rs. 146.50 crores.

With the commencement of the grid sub-station at Jamua, quality power supply has been ensured in Jamua, Rajdhanwar, Tisri, Gawan and Deori blocks of Giridih district. The total capacity of this grid is 100 MVA and the total length of transmission line is 23 km. The project costs Rs. 72.50 crores.

The total capacity of the Sariya Grid Sub Station is 100 MVA and the total length of the Giridih-Sariya transmission line is 42 km. The total cost of this project is 80 crores. A quality power supply has become possible in Sariya, Bagodar, Dumri and Birni blocks of Giridih district with its commencement.