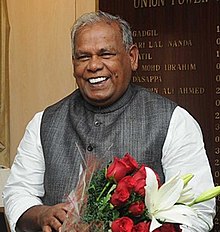 Since he is smart enough to plan future of his career,every politician tends to check which way the electoral wind is blowing.Hindustan Awam Morcha (Secular) president Jitan Ram Manjhi is famous for having this sensing skill.

Notwithstanding his past records, this time Manjhi met Bihar Chief Minister Nitish Kumar amid speculations of his talks over seat-sharing before joining the ruling NDA in.

Manjhi was spotted getting down from his car at the official residence of Bihar CM and met Nitish Kumar Kumar in Patna today. Though Manjhi denied having discussed anything connected with his coming electoral alliance, he is learnt to have shown his gestures to shake hands with him again.

Record shows that Manjhi had on August 20 severed his ties with Grand Alliance (Mahagathbandhan) after spending two and a half years in the opposition coalition.
Quick