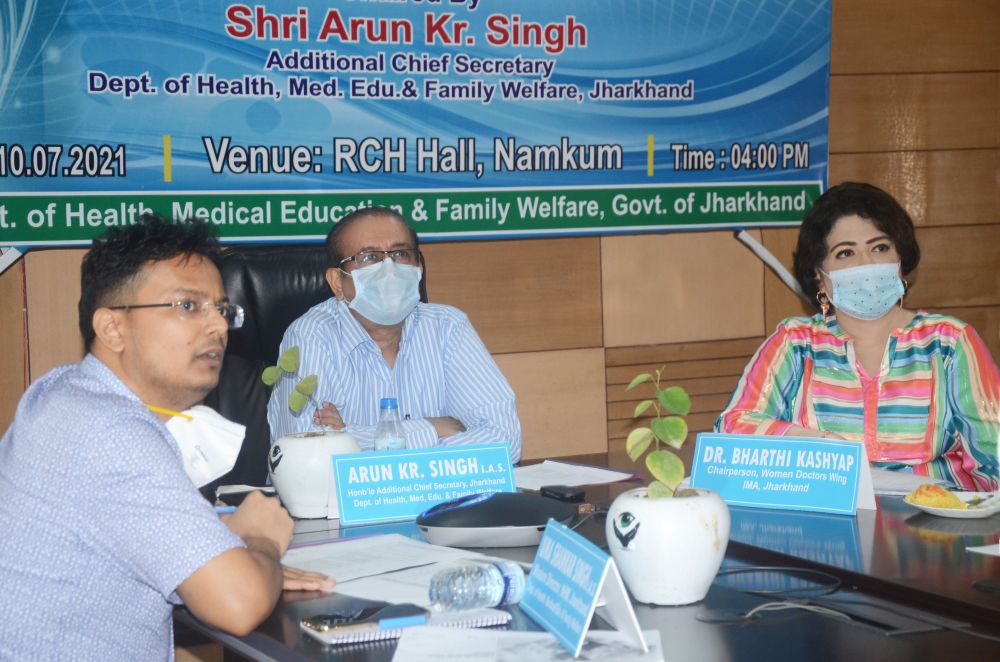 Amidst the threat of a third Covid wave, Jharkhand today launched a state wide drive to eliminate Cervical Cancer, a major cause of cancer mortality in women and adolescent girls, by ordering regular screening of women and young girls, at 11 state run Sadar Hospitals across Jharkhand, with immediate effect.

Jharkhand has 23 Sadar Hospitals out of which regular screening for cervical cancer would be done at 11 Sadar Hospitals at Ranchi, Khunti, Hazaribagh, Giridih, Koderma, Deoghar, Godda, Dumka,Jamtara and Pakur .

Cervical Cancer, though preventable with timely detection and treatment, is the second largest cause of cancer-related deaths in women in India,  after breast cancer. Rough estimates reveal that around 185 women die of cervical cancer in India, every day. The statistics further reveal that women in the 15 to 44 age groups are more susceptible to cervical cancer.

At a Webinar webinar organised by Women Doctors Wing, Indian Medical Association (IMA), Jharkhand, in association with Department of Health and family welfare , Govt. of Jharkhand from RCH Hall, Namkum, Ranchi, Dr.Bharti Kashyap, chairperson, said that the purpose of the webinar was to ensure more effective utilisation of the Cervical Pre Cancer equipments, already installed at 11 State run Sadar Hospitals in Jharkhand, and impress upon the state health department to fix targets for screening of women and adolescent girls at Sadar Hospitals based on their average patient Gynae OPDs.

The Webinar was attended by civil surgeons, gynaecologists and obstetricians working at 11 Sadar hospitals of the state as well as superintendents of state run medical colleges.

"Since 2015, Women Doctors Wing has been in the forefront to save women, particularly rural women, by conducting Cervical Cancer Screening Camps and Anemia Detection Camps in all districts of Jharkhand, educating women and adolescent girls, on the warning  symptoms of Cervical Cancer, menstrual health, proper sexual behaviourand the need to take better control of their lives," said Dr.Bharti Kashyap, chairperson, Women Doctors Wing, IMA, Jharkhand.

Sixty percent of  women, who turned up at these camps, were detected to be suffering from genital infections, exhibiting pre- cancerous symptoms Absence of a national Cervical Cancer screening programme in India left women, particularly rural women, more vulnerable. To save our women, we began to inspire and persuade political leaders to join hands. Inspired by our efforts, Jharkhand Governor, Droupadi Murmu donated a digital Colposcope with a computer and Cryo set for Sadar Hospital at Sahebganj and Cryo machine with nitrous gas cylinders to 5 SadarHospitals in Santhal Parganas at Deoghar, Jamtara, Pakur, Dumka and Godda.  Another digital video Colposcope with computer and CryoMachine was donated by me, in my personal capacity, to Sadar Hospital at Ranchi, Dr.Kashyap added.

"The efforts of Women Doctors Wing bore fruit as MLAs from Khunti, Hazaribagh, Giridih and Koderma were persuaded to donate similar machines for Sadar Hospitals in their districts. Jharkhand is the only state of the country, where 50 percent of State run Sadar Hospitals are fully equipped with Digital Video Colposcope and Cryo machines to undertake regular screening of women and adolescent girls," Dr.Kashyap said.

I suggest that to ensure a cervical cancer free Jharkhand, all state run hospitals be equipped with necessary equipments for Cervical Cancer screening, arrangements for training of gynecologists and obstetricians, vaccinating young and adolescent girls against cervical cancer and regular screening of women in the age group of 21 to 65 years, she stressed.

Speaking on the occasion, Arun Kumar Singh, additional chief secretary, Health, said that Cervical Cancer kills 185 women every day and 67,500 women in a year in India. In Jharkhand, some initiative has been taken to equip in 11 Sadar Hospitals with Colposcope and Cryo machines, though in many places, these machines have been grossly unutilised and under utilised. In addition, at most places, people in general, are also not aware of the existence of cervical cancer screening facilities at the Sadar hospital near them.

"With proper vaccination and PAP smear test, better utilisation of equipments and training of personnel , cervical cancer can be fully eliminated. I suggest that civil surgeons undertake proper inspection of these machines at the earliest, so that resources could be used to provide relief to women. It is expected that all concerned, should live up to expectations and lethargy, in any manner, if found, would be severely dealt with," the additional chief secretary, health, emphasised.

Screening of women for cervical cancer should begin at the 11 designated Sadar Hospitals, commencing next week. For Ranchi, a monthly screening target of 180 women has been fixed. For Hazaribagh, the monthly target is 112, fir Giridih 90, for Sahebganj 45, Dumka 67, Jamtara 22 and for Pakur Sadar Hospital, 23 women should be screened each month. Decision on other Sadar Hospitals would be taken after discussions with concerned civil surgeons of the districts," the additional chief secretary, health, said.

Joining the webinar from New Delhi, Dr.Kanika Gupta, director, Oncology Department, Max Hospital, stressed that just as Polio was eradicated from the country, so also a good effort would be able to eliminate cervical cancer, as well.

"I am willing to come and train 100 doctors, at your facility at Ranchi. I shall also provide online training to your women doctors on treatment of cervical cancer on July 12 and 19," Dr.Gupta said.