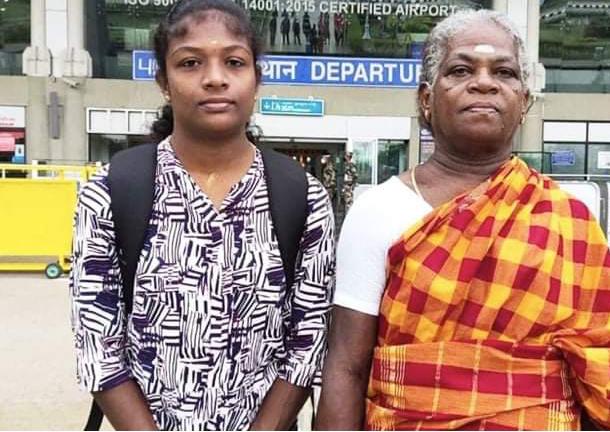 *Meet 23- year old V. Revathi from Madurai with her grandmother who raised her since Class IV.

She lost her parents as a child. Revathi Veeramani and her younger sister were brought up by their maternal grandmother, K. Aarmal who worked as a daily wager in an isolated village Sakkimngalam, Madurai.

Veeramani will race for the country in the 4x400m mixed relay event at the Tokyo Olympics, starting on July 23. She secured her berth recently. The sprinter revealed to Zee News that she had lost her parents at a very young age. Struggling to earn even a single meal, they walked barefoot. Due to poverty, their grandmother had no option but to leave her and her sister in a Government Hostel.

From their second grade until completing their twelfth grade, she remained in the hostel and carried on with her education with her sister, meeting their grandmother once a month. It was during the school-level track events, the 12th grader took part in 100m dash and ran barefoot.

She put on a stunning performance and made the finals, thus impressing Coach Kannan. He went on to train her and support her financially, while also providing food and accommodation. He helped her sister get a job in the police department. She said her relatives asked her grandmother to send the girls to work so that she could rest at home but she refused, The Hindu reported.