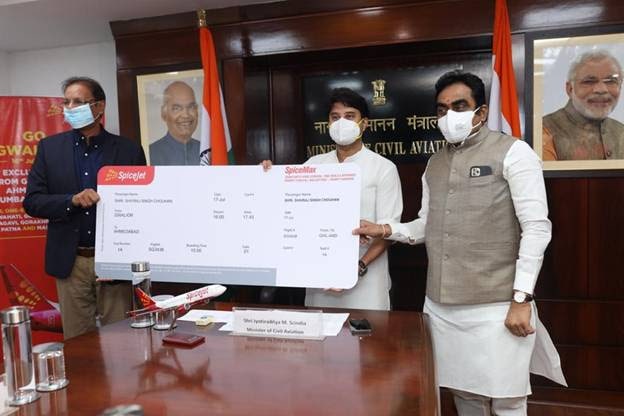 Rakesh Singh, Member of Parliament, Jabalpur, Pradeep Singh Kharola, Secretary, Ministry of Civil Aviation along with other senior officials of the ministry were also present during the flag off.

JyotiradityaScindia said “I would like to congratulate the people of Madhya Pradesh, Maharashtra and Gujarat on the commencement of the new flight operations. Besides, additional flights between the Delhi-Jabalpur route will also commence from July 18 onwards, and Khajuraho-Delhi-Khajuraho flights from October 2021 onwards. We are committed to bolster regional air connectivity and take the Prime Minister's vision of Ude Desh ka Aam Naagrik (UDAN) to greater heights!"

Gwalior is one of the first airports of Madhya Pradesh to be connected with the UDAN route and further enhancements in the air traffic led to the advent of additional regional routes. Gwalior is now well connected with Bengaluru, Hyderabad, Kolkata, & Jammu as UDAN routes and Mumbai, Pune, & Ahmedabad as non-UDAN routes. The city is famous for its historical buildings like- Gwalior Fort, SaasBahu Temple, Tomb of Mohammad Ghaus, PhoolBagh, Gujari Mahal Museum, TeliKaMandir, Gwalior Zoo, Moti Mahal & Jai Vilas Palace. The new routes will boost the aerial connectivity of Gwalior, the tourism city of Madhya Pradesh with the trade hubs of India, Maharashtra & Gujarat, and further improve economic activity.

The commencement of these routes fulfils the objectives of the Ministry of Civil Aviation to enhance the regional connectivity of the Tier-2 & Tier-3 cities with the metro cities of the country. With the flag-off, Jabalpur airport (Madhya Pradesh) is now connected with Bangalore, Hyderabad, & Pune as non-UDAN routes & with Bilaspur as UDAN route. Jabalpur is the administrative and educational centre of Madhya Pradesh. Home to Dhuandhar Falls, Madan Mahal Fort, Balancing Rock, Bargi Dam, GurudwaraGwarighat Sahib, and Dumna Nature Reserve Park, the city is also a major tourist hub.

Inauguration of these routes achieves the aim of the Sab Uden Sab Juden initiative under the UDAN scheme to strengthen the established aerial network of the country while providing a catalyst to the local economy & tourism.

To date, 359 routes and 59 airports including 5 heliports and 2 Water Aerodromes have been operationalized under the UDAN scheme.