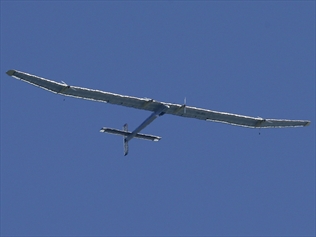 Kudos to human brain and hard work. Man has been successful in utilising solar energy, a renewable form of energy available in abundance and which does not cause pollution to fly a plane .It became a record in the history of aviation when pilot Betrand Piccard flew the solar powered airplane across different cities in United States taking off from California and landing in Phoenix.

“The European designed Solar Impulse set down about 12:30 a.m. local time at Sky Harbor Airport after flying several hours after sundown on a journey which Bertrand Piccard described as a ‘milestone’ in aviation history”,said .cbc.ca

No gas,no air,no water, just sun’s energy. ‘’The Solar Impulse – the world’s most advanced sun powered air plane’’ will make a breakthrough since it will help to conserve other energy resources, the need of the hour.