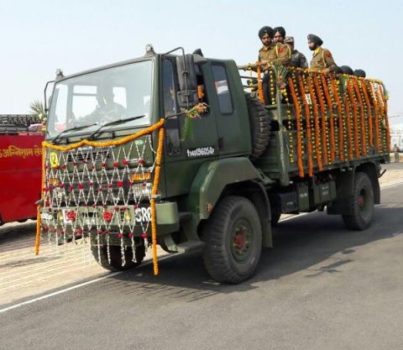 Picture courtesy dainikbhaskar.com shows the Army vehicle taking the body of martyr Shashikant Pandey(23) of the 51 Rashtriya Rifles of Indian Army being taken to the bank of Damodar river at Mohalbani Ght in Jharia,Dhanbad on Monday.

Jharia in Dhanbad remained numb after last rites were performed on the body of the martyr Shashikant Pandey(23) on Monday.

The last rites were performed on the bank of Damodar river at Mohalbani Ghat.Pandey, one of the three soldiers martyred after terrorists opened fire at an Army convoy at Pampore, Pulwama district of Jammu and Kashmir on Saturday, was a Dhanbad youth.

He belonged to the 51 Rashtriya Rifles of Indian Army.He was posted at Srinagar.His body had arrived in Ranchi on an IndiGo flight on Sunday evening.Jharkhand Governor Draupadi Murmu had visited and paid tributes to him on Sunday.

Pandey’s family in Jealgora, 15km from Dhanbad district headquarters, is torn between grief and pride. Rajeshwar Pandey, his father, said he received the news over phone on Saturday evening.