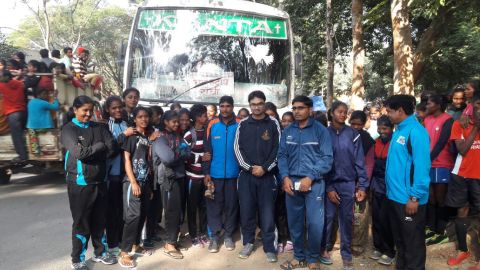 Picture shows Jharkhand Girls under 17 team after defeating Punjab 2-1 in Ranchi on December 12,2016.

Jharkhand once again gained the limelight in the School Games Federation of India(SGFI) Hockey under 17 Girls tournament in Ranchi on Monday.

The score card said that Jharkhand team had defeated Punjab by by 2-1 and won the SGFI Hockey under 17 Girls tournament 2016..

The victory was acheieved when Priya Dungdung and Beauty Dungdung hit one goal each.Earlier,in the semi final,Jharkhand girls had defeated Utter Pradesh 3-0.