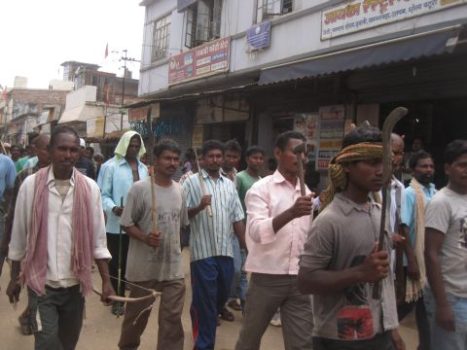 The state administration is faced with tribal organisations in Jharkhand where they have called for the state wide bandh on Friday to protest against the amendments in two land acts by the BJP government led by Chief Minister Raghubar Das.

Even the state police was busy deploying forces to mantain law and order.”We are are of the bandh and hope law and order situation remains normal”,said DGP DK Pandey.

Jharkhand Adivasi Morcha and other tribal organisations have called for the shutdown to protest against the amendments passed in the assembly on November 23.

The Opposition parties including the Congress, Left parties and the JharkhandVikas Morcha have extended support to the tribal organisations’ bandh.

The united opposition had earlier called for shutdown in Jharkhand on November 25 against the amendment in two land acts.

“The shutdown has been called as the state government is playing with the sentiments of the tribal and indigenous people. The amendment has been made in both acts to grab tribal people’s land,” said Karma Oraon, Convener,Jharkhand Adivasi Morcha.

The state government led by Das had succeeded in passing the bills amending the two land acts — Chotanagur Tenancy Act (CNT) and Santhal Pargana Tenancy (SPT) Act .The amendment bills tabled amid protests by the opposition on November 23 were cleared by voice votes, without holding any discussion.