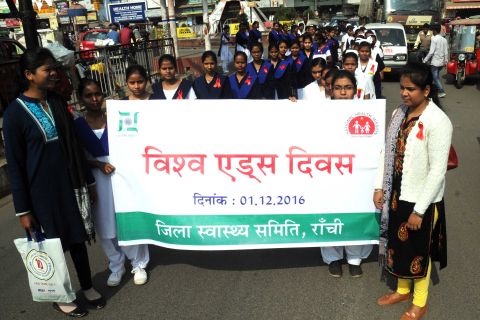 Ranchi, Jharkhand 01 December 2016 :: Nurses takes out a awareness rally on the occasion of World AIDS Day in Ranchi on Thursday. Photo-Ratan Lal

Even in the capital of Jharkhand,many residents were not only aware about it but feared its mode of transmission through blood and blood products and therefore through unprotected sex.

In 1990s,AIDS had sent shockwaves around the world.Today,the rate of sexual transmission of HIV AIDS has been established to be far less than other means like infected syrings and blood transmission.

When the world celebrated AIDS Day on Thursday,the conscientious citizens looked back with some satisfaction at its AIDS control programme.The timely and focussed programme has proved that all those dooms day predictions were wrong with India having managed to register a 57 percent decrease in new infections in the past decade.

(Ranchi, Jharkhand 01 December 2016 :: Nurses takes out a awareness rally on the occasion of World AIDS Day in Ranchi on Thursday. Photo-Ratan Lal)

However,figures remain formidable largely because of the sheer vastness of the population and people who were the architects of that success story now look terrible as the government has wound up the NACO as a separate body-the AIDS control department remains as a separate body in the Health Ministry.

Records show that there are an estimated 10 lakh people currently living in India with HIV.It had been part of the AIDS control programme around the world to designate all people infected by the human immunodeficiency virus(HIV) regardless of whether they are a full-blown case or not by the sngle denomination of PLHIV.

As it is,the nurses in Ranchi took out an awareness rally on the occasion of the World AIDs Day on November 1,2016.