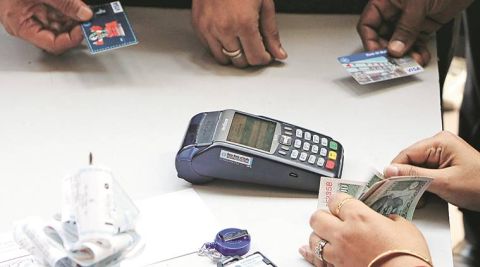 People swapping Dabit Cards for Withdrawal 2000 Rupees from outside one of the Bank at Bank Square in Sector 17 of Chandigarh on Friday, November 18 2016. Express Photo by Kamleshwar Singh

Khare said that the state government is working on a eight-point programme to make cashless system popular among the people.”All senior officers of the state should give importance to it and by putting focus and adopting it,push the system forward”,said Khare.

He said that 83 lakh Jan Dhan Accounts were opened in the state.”Likewise,take the cashless system forward”,he said directing Deputy Commissioners and other officers at the district level to ensure that every family in the state had atleast one bank account.

To open bank accounts of the workers of the unorganised sector,the state government is going to hold special camps,he said.”Find out if the bank accounts opened were updated or not.This was necessary because withing six months the accounts will get blocked if not updated.”

Using Common Service Centre(Pragya Kendra),all DCs should make the people aware of the cashless economy.By December 25,the DCs and BDOs should submit report about cashless Blaock so that they can be awarded by December 28,said the ACS.

“The EPOS machines are being distributed and Excise duty and the VAT are freed from its sale and purchase so that Cashless system can be made popular among owners of the Jan Dhan accounts”,said Khare