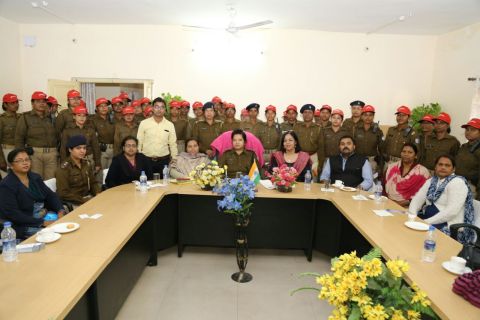 This was programme was organized on the eve of the International Day for Elimination of Violence against Women and is a part of UNICEF’s ongoing ENDviolence against children campaign.

Madhulika Jonathan, Chief of UNICEF Jharkhand said, “It is important for parents and teachers to orient children that with power comes responsibilities and so is the case with social media. Children must protect themselves online and demonstrate mature behavior because an action on social media is irreversible and stays there forever.”

The children took a pledge to become responsible citizens and to practice safe behavior on social media. Information pamphlets and bookmarks were also distributed during the session.

The cyber helpline number (9771 432 133) was shared with the students who were encouraged to reach out in the hour of need. The focus of the programme was on reporting, reporting platforms available in the state and breaking the culture of silence around violence and abuse of any kind.

A small session with around 42 Shakti Commandos (police personnel trained to respond to alerts in case of an emergency on the Shakti app developed by Jharkhand Police in 2015); Inspector of the Cyber thana (there is one such thana in each district); and the team of ‘Nirbhik Hum Tum’ (a small team constituted by CID, Jharkhand Police to regularly visit and orient school students on protection issues as well as legal provisions) was also held to train them on how to deal with cases of online abuse.

As it is,one in three women around the world experience violence in their lifetime, often in the hands of someone they know, love and trust. Of all women who were victims of homicide globally in 2012, almost half were killed by intimate partners or family members.
Violence against women and girls, a gross human rights violation, devastates lives, causes untold pain, suffering and illness. It also incurs high economic costs. A recent study estimated that the cost of intimate-partner accounted for 5.2 per cent of the global economy [[i]]. Beyond the direct medical and judicial costs, violence against women takes a toll on household and national budgets through lost income and productivity.

Deep-rooted inequality in the roles, rights and opportunities of men and women, and attitudes and social norms that condone or normalize such violence, have made the problem tenacious, but not inevitable. With laws to protect women and punish perpetrators, services to rebuild women’s lives and comprehensive prevention that starts early, ending violence against women and girls can become a reality. Yet, robust funding for efforts to end this violence remains woefully insufficient.

Why This International Day?

· Violence against women is a human rights violation.

· Violence against women is a consequence of discrimination against women, in law and also in practice, and of persisting inequalities between men and women.

Launched in 2008, the United Nations Secretary-General’s UNiTE campaign aims to raise public awareness and increase political will and resources for preventing and ending all forms of violence against women and girls in all parts of the world. It calls on all governments, civil society, women’s organizations, men, young people, the private sector, the media and the entire UN system to join forces in addressing this global pandemic.

The global vision of the UNiTE campaign is a world free from violence against all women and girls. This vision can only be realized through meaningful actions and ongoing political commitments of national governments, backed by adequate resources.