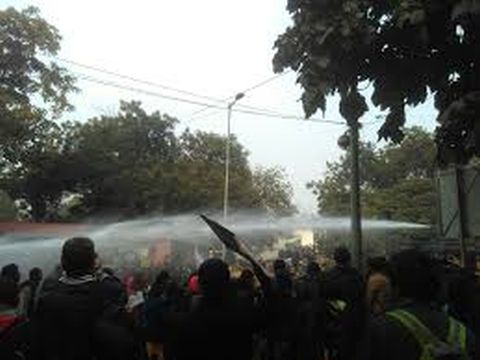 Police used water canon and lathi charge to dispurse the unruly crowd in Main road Ranchi.More,six bandh supporters were arrested while  two vehicles belonging to them were seized in Jharkhand on Friday when the Opposition led by Jharkhand Mukti Morcha enforced state wide bandh against the amendment in the land Acts by the BJP government led by Chief Minister Raghubar Das.

The police  struggled to maintain law and order in Ranchi where schools and colleges as well as market places remained closed through out the day.The agitationists moved around in the city violating the  prohibitory orders under section 144 CrPC.

In response,the police used force and lathicharged.”This forced the agitationists run away from the Main Road area”,said a senior police officer in Ranchi.Though hospitals,government offices and banks remained open,traffic was thin and transportation in the state and national highways remained paralysed through out the day.

In Giridih district,the impact of the bandh was visible in the town as  the agitationists belonging to the JMM and CPI (ML) took to the streets and put up road blockade on National Highway GT road since morning.

The state administration had imposed prohibitory orders under section 144 CrPC in Bagodar-Saria sub-division of the district in view of the bandh, official sources said. Sub-Divisional Magistrate Pawan Kumar Mandal said the order will be in force from 6 am to midnight on Friday.

Bandh supporters including Congress, JVM and RJD party workers have also blocked the road at Jamua chowk in Giridih town even though the police was persuading them to withdraw it. No shops and business establishments are open anticipatingviolence during the bandh.

Deputy Commissioner Rahul Kumar Sinha said the district administration has taken all precautionary measures and is fully prepared to meet any eventuality during the bandh.