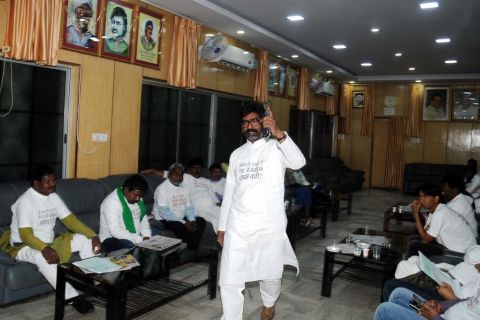 Tension has gripped Jharkhand after the state Assembly witnessed unprecedented scenes on Wednesday when a shoe was hurled at Speaker Dinesh Oraon, his mikes were damaged and chairs and tables in the house were thrown around.

This happened after the stalemate of months between the ruling BJP led by Chief Minister Raghubar Das and the opposition led by JMM vice president and ex CM hemant Soren over two land acts ended this afternoon when an amendment bill was tabled and passed within minutes without any discussion on it.

When the house assembled lunch at 2 pm, Land and Revenue Minister Amar Bwari tabled the amendment bill amid an uproarious scene of opposing parties.Opposition members trooped into the well of the house shouting slogans against the amendments to two land acts of the state — Chhotanagur Tenancy (CNT) and Santhal Paragana Tenancy (SPT) Acts.

This was diclared passed by the Speaker.