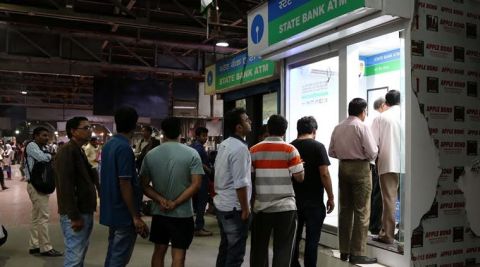 Queue outside ATM center after PM Modi announced 1000 and 500 rs notes not working in regular use at ATM in Mohammad Ali Road. Express photo by Prashant Nadkar, 08th November 2016, Mumbai.

Demonitisization of high currency notes of Rs 500 and Rs 1000 continues to force people stand in queues to draw money from the banks in Jharkhand.

Eventhough long queues were spotted outside banks and ATMs,the banks suffered from shorage of cash.This had left many ATMs of the State Bank of India and bank of India closed on Thursday.

Many eyes were numbed with the incident of death of an elderly man.He had collapsed while waiting in a queue outside a bank in Palamu district on Wednesday afternoon.

Police said Ram Chandra Paswan, in his seventies, was a resident of Rambandh village of Garhwa district and had come to withdraw money from his pension account at the Mohammadganj Branch of the SBI. In the afternoon, he collapsed and was rushed to a hospital, where he succumbed.