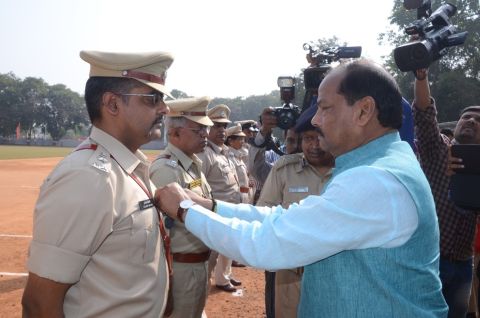 To mark the state’s 17th Foundation day,Jharkhand police exhibited its strength while Jharkhand Chief Minister Raghubar Das highlighted the role played by it in containing crime and Naxalite violence cases in the state.

Ranchi SSP Kuldip Dwivedi,who had led the police control crime in the state capital,was awarded by the CM Raghubar Das.

Speaking on the Foundation day parade,the CM said that the prime goal of the state government was to make the state ‘free from crime and Naxalite violence .’He said that in view of the need and requirements,the recruitment of policemen was going on at a high speed.

“In the coming year,10,000 constables and 2500 police personnel will be appointed”,said the CM Raghubar Das adding that the state government was in receipt of investment proposals worth Rs 24,000 crore.